Proposition 15, which would reclaim an estimated $12 billion annually for California schools and communities by reassessing commercial and industrial property to current values, has slipped below the hallmark 50% level in a new statewide poll from the Public Policy Institute of California. The measure now holds a 49% to 45% lead among likely voters, with 6% undecided. That four-point margin is down from 11 points in the institute’s September poll, when the lead was 51% to 40%. 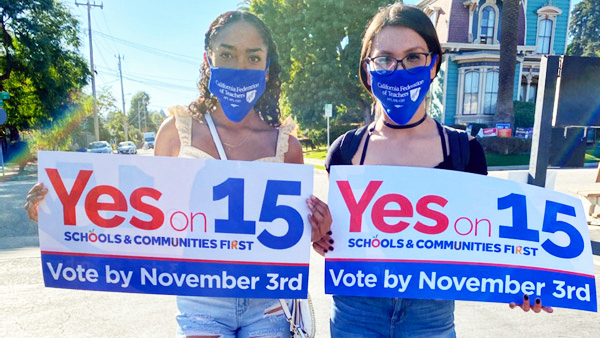 The No on Prop. 15 campaign, funded primarily by large corporate and real estate groups, is using the specious argument that small businesses will be hurt by Prop 15 because they would have to pay increased rents created by the higher property taxes. In fact, business owners whose properties are assessed at less than $3 million would be exempt from the new rule and the proposition would create a large tax cut for small businesses by exempting all personal property of businesses with fewer than 50 employees. Those who own properties valued less than $3 million comprise 90% of all commercial property owners in the state, according to researchers for the USC Dornsife Program for Environmental and Regional Equity, which conducts research on social and environmental justice and immigration issues.

An analysis of the impact on rents from the sale of commercial properties in 12 counties, released Sept. 24, concluded that reassessing a commercial property after 20 years could cause a one-time 2% rent increase for an office space renter. “Most claims about Proposition 15’s impacts on small businesses are unfounded,” said Christopher Thornberg, founding partner of Beacon Economics, which conducted the survey. Market prices, not property taxes, will determine rent. Professor Manuel Pastor, director of the USC Dornsife Program, said: “It’s amazing to hear opponents’ argument. Until recently, rents were going up even though no costs were changing, and they’ll likely go down, because that’s the market,”

A relatively small group of corporations with valuable properties will pay most of the tax increases. Studies have projected that only 10.5% of commercial properties would generate 92% of Prop. 15’s revenue.

Volunteer for a “Yes on 15” phone bank

It will be up to all of us to do the work to get this critical measure over the finish line. Just a couple hours of your time will make a difference in the campaign. Please join one of the daily ‘Yes on 15’ phone banks run by the campaign and encourage your friends and family to Vote Yes on 15.