If you’ve opened your mail, turned on the TV, checked your texts, logged into social media, put in a food order for delivery or pickup, or hailed a rideshare car recently, you’ve likely seen a message urging you to vote yes on Proposition 22. In addition to pouring $200 million dollars into their Yes on 22 campaign, Uber, Lyft, Instacart, and Doordash have also repurposed their own apps as campaign platforms, so that ordering a burrito now also necessitates navigating around, or reading through, tech industry talking points.

Instacart has even mandated that all drivers spend time placing Yes on 22 stickers inside every grocery order they deliver, whether or not they personally agree with the proposition. Because gig economy workers are paid only for an individual job, and not for their time, Instacart shoppers are not receiving any compensation for the work of distributing their boss’s campaign material, even as they’re required to do it. Many workers have questioned whether this—ahem—sticky situation is legal. 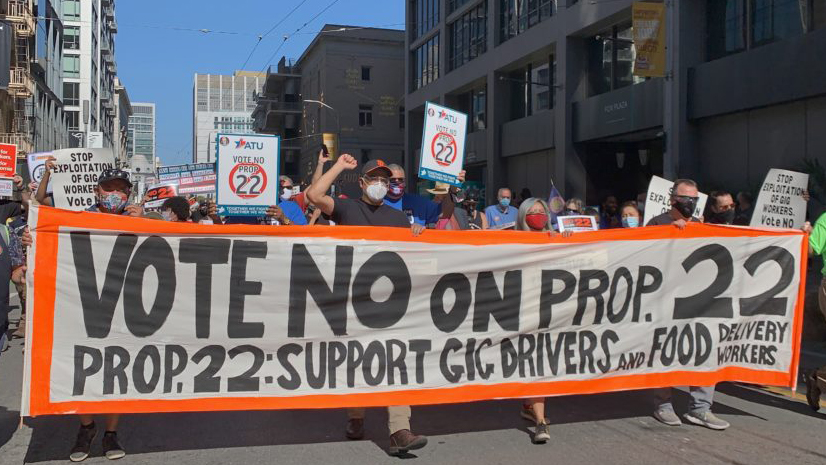 Even as Prop 22 backers use a variety of novel means to distribute their message, the message itself is astoundingly consistent. Prop 22 is said to preserve gig workers’ “flexibility,” save app-based jobs, and offer drivers “new” protections. This last claim is easy to debunk: gig companies claim their proposition will guarantee drivers 120% of minimum wage, but this wage applies only to “engaged time” giving rides or delivering food, and not to time spent getting gas, cleaning and disinfecting cars, or waiting for clients or food orders. When these hours are taken into consideration, a recent study by UC Berkeley’s Labor Center found, Prop 22 guarantees a wage of only $5.64/hour.

Not to mention that the supposed “benefits” of Prop 22 to workers are not new at all: rather, they represent significant rollbacks of the protections already provided to gig workers by California’s Assembly Bill 5, signed into law in September of 2019, which guarantees gig workers sick leave, workers’ comp, and an actual minimum wage. As researchers with Partnership for Working Families (PWF) and National Employment Law Project (NELP) wrote, “the benefits contained in the initiative pale in comparison to what workers are entitled to under state law.” Up to now, Uber and Lyft have failed to honor AB5, meaning that they are subject to litigation by the State of California. In this light, the new protections Prop 22 offers are, in fact, protections for companies that continue to flagrantly and illegally exploit their workers—not protections for the workers themselves.

But what about the tech industry’s other two claims: that Prop 22 preserves “flexibility” and saves jobs? To respond to these, we need to look at who benefits from the gig economy’s flexibility—and why workers are compelled to seek gig economy jobs in the first place.

AB5 does not require drivers to work set schedule

To back its claims that workers want flexibility, gig companies have highlighted the cases of single parents who want to squeeze in a few hours of driving while their kids are at school, or full-time workers who need extra cash to make ends meet. Yet nothing in AB5 requires drivers to be full-time or work a set schedule: it simply requires employers to provide them with basic protections.

The flexibility Prop. 22 guarantees, then, is not flexibility for workers but flexibility for employers who want to adjust their business model at a moment’s notice—including reducing wages below the legal minimum and terminating workers without having to pay unemployment benefits. Unlike a traditional business, Uber doesn’t have to worry about making payroll, at least where drivers are concerned. Rather, any decrease in demand is instantly passed on to drivers as a decrease in wages. In other words, workers bear the full burden of the risks inherent in their employer’s business model—all while earning less than ever.

This model—in which an organization fails to take responsibility for the unpredictability of its industry, and instead passes that responsibility onto underpaid workers—should be familiar to those of us who work in higher education. We all know of instances in which administrators have canceled courses days or even hours before the start of instruction, with dire consequences for part-time faculty and their students, all while protecting their own healthy salaries. And those of us who have ever been part-time are familiar with not just the emotional turmoil but the extra labor necessitated by such a precarious employment situation. When I was an adjunct, I remember not only pouring countless hours into applying for jobs—never knowing whether the job I had would get renewed—but also putting in overtime at the start of almost every semester pulling together classes I had been assigned at the last minute. Uber, Lyft, and other gig economy companies, who pay (euphemistically speaking) “flexible” wages, take a similar toll on their workers, who must be available more and more of the time in case opportunities for decent paying work arise.

What these two gig sectors have in common is their insistence that there are no guarantees. Workers must be available to take any assignment, at any time, under any conditions. And by systematically underpaying their employees, both higher ed and app-based companies ensure an ever-growing supply of individuals forced to turn to them for work. The less one gig economy job pays, the greater the likelihood that a worker will have to take on another to make ends meet—with the result that some adjunct professors now also work as Uber drivers.

If Prop 22 wins, it is likely the gig model will transform many other stable jobs into piecework

In other words, the gig economy has found in underpayment and instability the mechanisms to continually increase its workforce by creating a framework in which individuals must seek more jobs and work longer hours to make ends meet. If Prop 22 wins, it is likely to accelerate even further the gig model’s transformation of once-stable, decently paying jobs into exploitative piecework. As a recent column published by the non-partisan, nonprofit CalMatters notes, “other industries are watching” the outcome of Prop 22. Someday, “Every nurse, janitor or construction worker in America could be hired by an app like Uber and Lyft’s, dispatched to a job and be told that they are performing their work as an ‘independent business,’ not an employee.”

This is not the world we want ourselves, or our students, to live and work in. Creating a better one—a world in which work provides a stable livelihood and an enduring connection to one’s colleagues and community—requires that we organize, unionize, and fight, both within and across industries, prioritizing the interests of the most precarious and exploited among us. It requires that we defeat not only Prop 22, but also the entire gig model that ensures an ever-growing labor pool by providing workers with ever-shrinking wages and benefits. Let’s deliver a resounding No on Prop 22—and let’s build a world that works for workers.