On January 22, a tentative agreement was reached between United Teachers Los Angeles (UTLA) and the LAUSD administration, ending the six-day strike that captivated the state and the nation. UTLA members ratified the agreement and returned to their classrooms the next day.

The historic agreement includes many of the key goals brought by the UTLA bargaining team, including strong language reducing class size, increased staffing of nurses, counselors and librarians, limits on testing, and the establishment of community schools.

Links to sources providing explanations of the issues and current news:

Join California Educators Rising, a growing network led by rank-and-file public school union members in California (over 850 members statewide) working to support our union peers in LA, Oakland, and beyond: 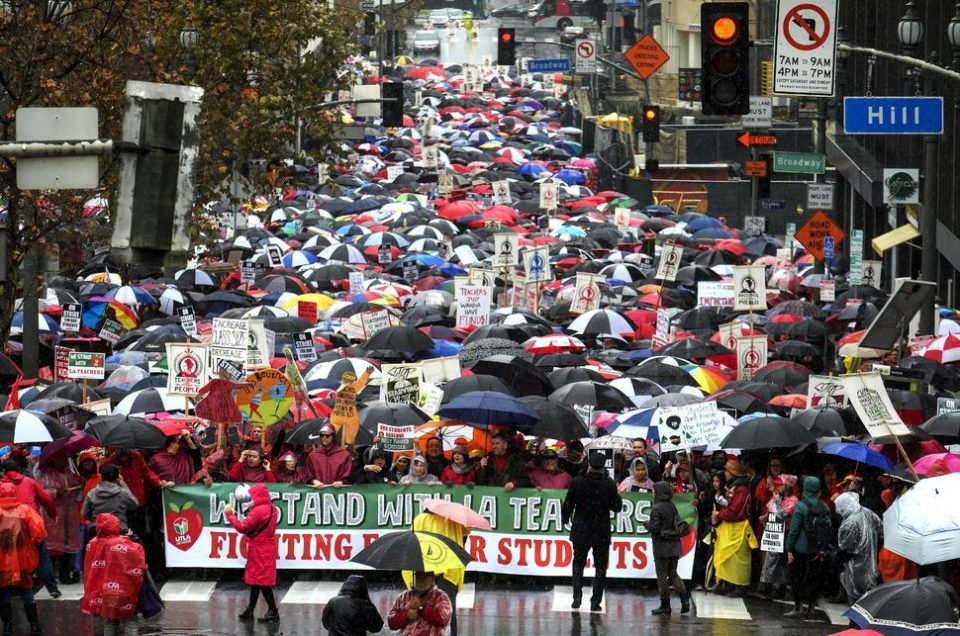 The Los Angeles school district has $2 billion in reserves, but it’s not willing to use the money to create the conditions educators need to help students succeed.

Educators in L.A. have been bargaining for 20 months, fighting not just for fair salaries but for every child in the city to have a safe and welcoming place for learning, and against the austerity measures for public schools the district’s superintendent continues to promote.

The members of UTLA are fighting for issues that, sadly, are too familiar: adequate funding for public schools, full-time counselors and nurses in every school, smaller class size, fair compensation and community schools.

And the boss? Superintendent Austin Beutner is intent on dismantling the school district and prioritizing charters, which syphon off $600 million a year. What he doesn’t prioritize—20 months after the contract expired—is neighborhood schools or a fair agreement with the district’s educators.

That is why UTLA members will go on strike on Monday, Jan. 14, absent a last-minute settlement (which no one predicts, as the district has busied itself with fighting UTLA in court rather than working to meet teachers’ and students’ needs at the bargaining table). You can help right now and over the next few days.

First, let the superintendent and school board know that the entire country is watching.

Send a message to LAUSD Superintendent Austin Beutner right now and urge him to quit stalling and reach an agreement with L.A.’s educators.

A strike is a last resort for working people when their employer, in this case LAUSD, refuses to listen to their important concerns.

Second, on Monday, Jan. 14, we need to be a sea of red from coast to coast. We are all L.A., on the first day of the strike. Los Angeles needs to see your solidarity, so please post your photos online using #UTLAStrong #WeAreLA #RedForEd so L.A. teachers can see your support!

This is a struggle for the future of public education, and many parents and communities are supporting us. If you want to make a contribution to that effort, donate to the Los Angeles Teacher/Parent Strike Solidarity Fund to support the strike by contributing to Reclaim Our Schools Los Angeles.

After nearly two years of fruitless negotiations and numerous unfair practice charges, the school district has failed to adequately address the issues we know are essential to a healthy, nurturing educational environment—like lower class sizes; full-time nurses, counselors and librarians; and less over-testing and more time for science, art and music classes.

Finally, we think the boss will try to wait educators out. That means we will need more solidarity actions, such as holding workplace “walk-ins” on Jan. 17. More to follow on that.

As a first step, if you believe L.A. students and educators deserve better, let’s fill up the email inbox of the superintendent. When he and school board feel pressure, not just from UTLA members but from the entire country, they’ll know they have to get serious about this contract.

2018 was the year of walkouts, but that energy continues now with L.A. teachers demanding the district give students the resources and investments they deserve.

P.S. Remember three other ways you can help show your solidarity with UTLA members and support their efforts to bargain a contract that is good for students and teachers—one that will strengthen, not destabilize, our public schools: