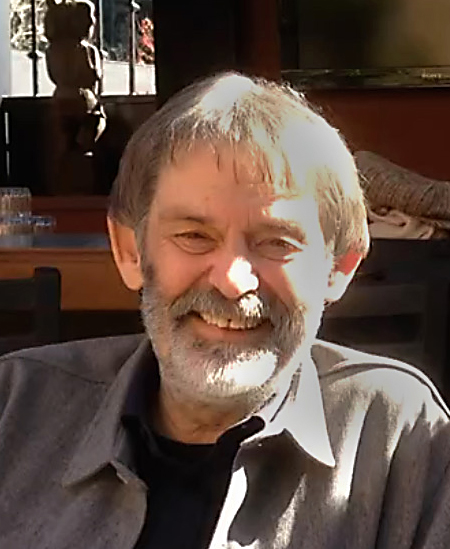 Bob Curtis was born in Quitaque, Texas. The Curtis family, including his sister, Linda, moved to Bakersfield when Bob was about six years old. He graduated from high school in Bakersfield in 1958 and made the short journey to enter Biola University in Los Angeles, He later transferred to San Francisco State University, where he earned a Bachelor of Arts degree and thereafter, a Masters degree. He married Nancy Whittaker in 1962 and had one son, Brent.

Bob started his teaching career at the College of San Mateo in the 1960’s before beginning his storied teaching and directing career at Cañada College. He taught English Literature and Theater Arts and directed an amazing eighty plays at Cañada alone, during the four decades and well over thirty years of his tenure.

When not in the classroom or directing, Bob was an avid writer and among his publications are two original plays with music, Frank and West, which were produced in the Cañada Theater.

West earned a Western Regional Finalist position in the Kennedy Center American College Theatre Festival, a competition that is open to all colleges and universities nationwide. The accomplishment could be equated to making it into the ”Sweet Sixteen” for the NCAA Division 1 Basketball Championships, a huge and prestigious accomplishment.

As a teacher and director, Bob invested himself in not only the development of his students as actors, but also in the life lessons of theatre discipline. Excellence was his standard.

Bob always had a great work ethic. We may not have agreed on everything, but we always agreed on maintaining the highest possible production values. Bob really cared about his shows and demanded the most from his actors. I’m sure the students and the community actors learned a great deal from him about how theatre is supposed to be done. Many of those students have gone on to good careers as a result of that experience. I imagine they would credit him for modeling respect for the art and craft of theatre. It’s a good legacy, I think.

Bob was able to forge long lasting friendships with his College peers, students and many others and had an extraordinary skill of creating a net that encompassed all. Some of the friendships made while he attended Biola University continued and flourished for their entire lives, including multi-day road trips together. The friends maintained and grew their love and camaraderie for over sixty years. Bob would tell stories of his experiences with his multitude of friends, binding all together, even though many had never met each other.

His sense of humor, sometimes irreverent, but excusable for its spontaneous creativity, added an energetic dynamic to most conversations.

His intelligence was palpable and when left to himself he most often was reading books of various subjects that he would later discuss with his friends and students.

“I couldn’t remember meeting teachers socially before, so this was all new. I became a fly on the wall listening to Bob and Kurt (another teacher- Kurtwood Smith) talk about everything from Shakespeare to John Ford. Introducing us to books, plays and movies I had never heard of.”

Bob retired from teaching in 2001, moved to Santa Rosa and continued to direct plays in the San Francisco Bay Area involving students and professional theater. In 2007, he moved to Nevada City and rented a home from his long-time friend and fellow retired Cañada professor, Kent Crockett, as they shared a very special and close relationship.

Bob spent much of his time writing poetry and short stories and published a book, Sweet Approximation and Other Stories. His fulfilling retirement involved annual trips to the Ashland Shakespeare Festival and the Monterey Jazz Festival.

Bob was an avid baseball fan and strongly supported the baseball program at Cañada. After retirement he and his good friend, Kurtwood Smith, would be guests at the Phoenix, Arizona training camp of the Los Angeles Dodgers watching their team start a new season as part of an annual Spring renewal of friendship and fun.

Bob loved to be on the road and he frequently traveled to visit friends and relatives in Oregon, Colorado and Texas to maintain those relationships. He never embraced the technology of smart phones, email or the internet, so all of the trips were planned with friends via paper communication. The road trips became spontaneous adventures as Bob would often “command” the driver to “stop” so he could investigate a roadside historical marker or follow a sign to a small town.

Bob was a unique person and a very special educator as he had a profound effect on many of his associates and especially his students. In lieu of an in-person memorial, a collection of memories and stories written by a few of his close friends and former students was created. “The Book of Bob” is a tribute and testimony to a fine man whose life enhanced and inspired so many, as we celebrate his life that has left a void in so many people’s lives.

An excerpt of a story written by a long-time friend, Virginia “Ginger” Hamilton, encapsulates who Bob was:

He had so many talents, so many edges, so much terrain to cover. He was both piercing and poetic, organized and creative, playful and intense, loving and blunt, humorous and compassionate, fearless and protective, reliable and unpredictable, principled and irreverent, classy and down-to-earth, finicky and flexible, devoted to friends and fiercely independent. He praised all that was truly creative and aggressively called out all that was foolish and corrupt… An unwavering one-of-a-kind individual who relentlessly did life “his way.”