Faculty, students and staff join the People’s March, tracing 52 years of the struggles of the Queer community 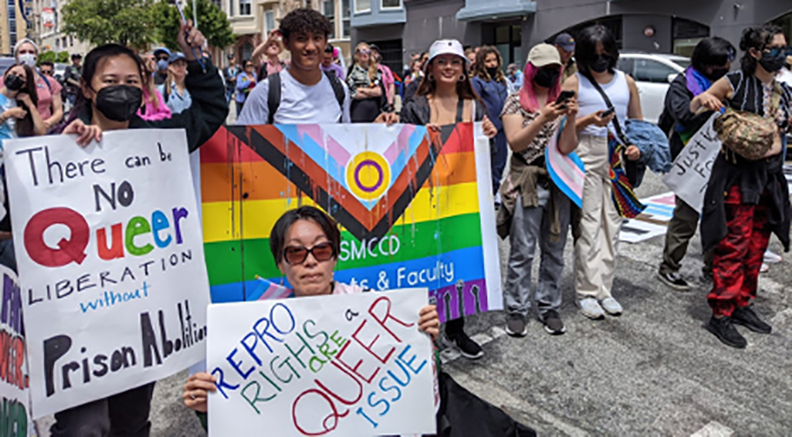 Over the years, the popular SF Pride Parade has become increasingly corporatized with a heavy police presence. Queer communities, also a target of police brutality, have been watching this development of the new Queer Capitalism with mixed feelings. Many may have heard of the controversy that erupted this year around the participation of uniformed SFPD officers in the SF PRIDE parade. This critique is important if we look at the precursors to PRIDE marches. Transgender customers at Compton’s Cafeteria stood up to police harrassment in 1966, and trans women of color such as Sylvia Rivera and Marsha P. Johnson played a key role organizing resistance to a police raid on the Stonewall Inn in 1969

Today, the concerns regarding the recent corporatized PRIDE range from the displacement of important issues within LGBTQ+ communities, such as the invisibility of Black/Brown/Indigenous Trans and Queer folks and lack of recognition of these histories of activism, to the police brutality that targets these communities.

The People’s March was born out of that spirit. This year, this alternative march happened on June 30th, overlapping with SF PRIDE in a direct act of protest against the benign festivity the latter has become. AFT 1493 organizers, SMCCCD students, and staff participated in this parade to show solidarity with queer communities and our over 50-year history of resistance.

For many students who participated, it was their first time to learn the history behind the PRIDE parade. For some of them, it was their very first PRIDE march. They could feel first-hand the political edge that the original Stonewall Riot has brought to LGBTQ+ communities.  Before marching, we listened to the rally by the organizers Juanita More!, the legendary drag queen and advocate, and Alex U. Inn from Black Lives Matter. They kicked off the march by saying, “All Black Lives Matter! All Trans Lives Matter! All Brown Lives Matter! All Indigenous Lives Matter!” Alex U. Inn then invited queer participants of color to the forefront of the march, asking white folks to step back to give space.

For Inn, centering QPOC marks one difference between a parade and a protest. Inn believes “…the Pride parade has lost their way. They started out with good intention and that was to emulate the gay liberation movement. Then money changes people left and right…We’re hoping to bring it back to neutral and reset and really have this — the People’s March — be for the people” (Ramos). And as More explains, these chants also explicitly denounce the deaths and murders of Black trans people: “I am most definitely fed up with the killing and the racism in this country and the scapegoating of Black Americans. The Black trans lives we’re losing blows my mind. I feel what we’re now doing is what Pride is really about” (Bravo).

The first PRIDE parade was organized by Gay Liberation Front (GLF), an LGBTQ+ civil rights organization stemming from the Stonewall Riot. This first parade in 1970 in San Francisco had 20-30 members of GLF walking down Polk street demanding their rights and safety from the police. Skyline student Arely Micah (she/they) participated in PRIDE for the first time. She learned the roots of PRIDE and the intention of this People’s March to resurrect the original political spirit. Arely comments, “As a 21 year old nonbinary first generation bisexual, going to pride has been a long-time desire of mine in order to feel embraced and seen when for so long I denied myself the freedom of being. The People’s March was very focused, driven, intentional, celebratory, artistic, inclusive, loving and important for me and so many others in the way that they emulated the core meaning of PRIDE.”

Amanda Ratti (she/her), another Skyline student majoring in Public Health, shared her impression: “The people’s March was refreshingly non partisan, anti-capitalistic and revolutionary, which brings PRIDE back to its roots. It reminds us of who laid the bricks before us so we could march proudly today and I feel honored to have been part of it.”

If you are interested in planning or attending the People’s March in Summer 2023, please contact your AFT organizers, Evan Kaiser (kaiser@aft1493.org) or Rika Fabian (fabian@aft1493.org).