In solidarity with the national #ScholarStrike and with work stoppages undertaken by professional athletes to support the Movement for Black Lives, AFT 1493’s virtual Teach-In —

was held Thursday, Sept 10.  Over 170 students, faculty members, staff and community supporters attended. Together we’re building solidarity for fair treatment of part-time faculty and confirming our commitment to racial and gender justice for SMCCD faculty, students and our communities.

View Sarah Harmon, Cañada College part-time Spanish professor and AFT 1493 member, speak on the conditions of part-time faculty and the need for equity:

View Breakout session 2: Organizing in our workplaces and communities NOW:

In the second breakout session, a number of young activists discussed how local organizing can make gains against injustice—in the workplace and beyond. From union campaigns in fast food and gig work, to grassroots efforts to defund the police, to insurgent electoral campaigns like the one that sent Alexandria Ocasio-Cortez to Congress, recent years have shown that local organizing can stand up to powerful, entrenched interests. But what makes organizing successful?

Breakout session 3: Racial and gender justice in the union, our campuses and our communities:

In session 3, Masao Suzuki, Economics professor at Skyline College, talked about the importance of having a strong union to protect faculty who fight for racial and economic fairness. He described his own experience when he lost a teaching job because he stood up for a colleague of color and there was no union to defend him. He said he was grateful to come to our District where he knew he could speak up for what he believed in and couldn’t be punished because the union had his back. (Llisten to Masao Suzuki)  Danielle Powell, Skyline Speech-Communications professor, showed a moving video of some of the women in the Women’s Mentoring and Leadership Academy (WMLA), a program she founded at Skyline to empower women students. She went on to talk about the “emotional labor” of giving complete and compassionate support to students, labor which is unpaid and often unseen by administrators. She noted that women often perform this type of emotional labor and that it isn’t captured in our contract or our evaluation procedures, but it should be. (Listen to Danielle Powell)  Former Cañada College Black Student Union President, Dontario Beverly, spoke powerfully about the ongoing trauma that exists in the Black community. He made the point that our Black students don’t have enough role models among professors on our campuses because the vast majority of the teaching staff is White — and that this needs to change. He called on the district to put its money where its mouth is and work harder for true equity for students of color. (Listen to Dontario Beverly)  Chris Collins, Skyline College History professor, began by telling his own story. He was taught by his parents to hide his hurt and stuff his feelings about unfairness and discrimination. He learned as he grew older that he had to “share the hurt” rather than hide it. Collins recounted an anecdote about his own schooling when he worked full time while he was a community college student. One of his teachers locked the door on him because he was a few minutes late to class – late because he had worked the graveyard shift the night before. When he knocked on the locked door, his teacher turned his back on him. At that point, he decided, “higher education wasn’t built for someone like me.” Collins went on to talk about “the pain inside higher education.” (Listen to Chris Collins)

Connect the Teach-In to your course content with a relevant assignment related to social justice issues. Choose from any of the exciting curriculum ideas provided here or develop your own.

We held the Teach-In to support our contract bargaining demands for part-time faculty, and to build solidarity on race, gender and labor issues among faculty, staff, students and our local communities.  The Teach-In featured a powerful group of speakers and panelists, including many of your respected colleagues and local community organizers. See full schedule below. 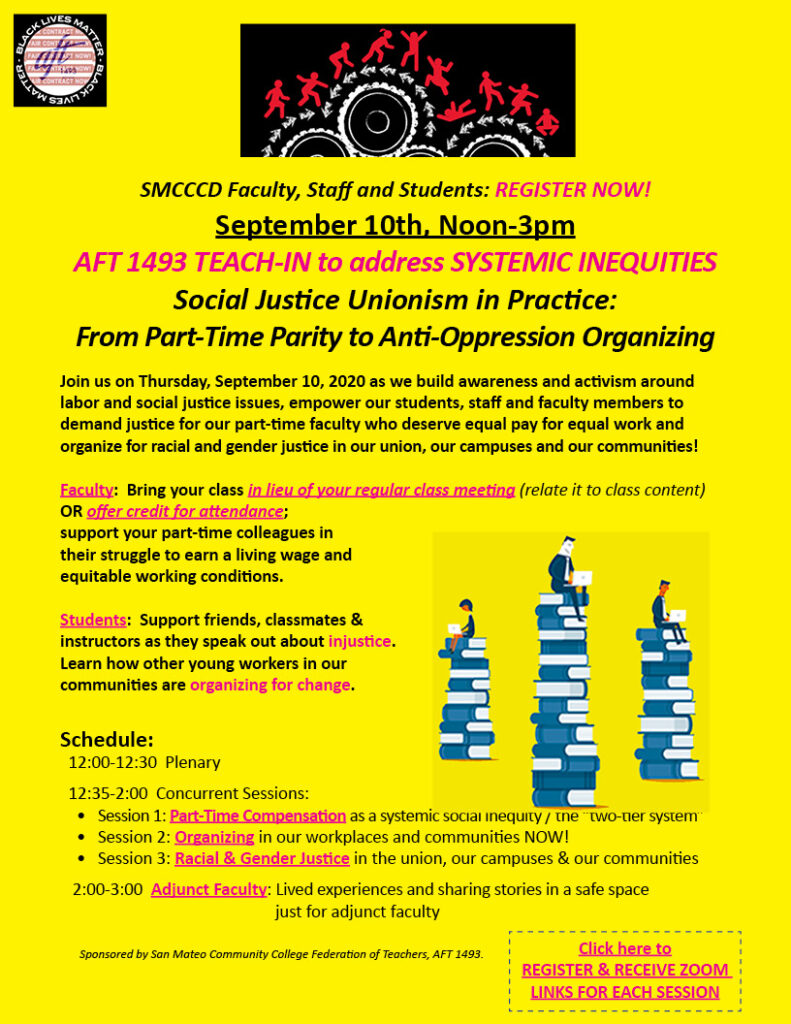 Session 2: Organizing in our workplaces and communities NOW!

Session 3: Racial & Gender Justice in the union, our campuses & our communities