Since Wednesday, October 17th, 7,700 Marriott hotel workers have been on strike in 23 hotels across 7 cities (Detroit, Boston, San Diego, San Jose, Oakland, San Francisco, Maui, and Oahu). These are the workers that make the hotels run: housekeepers, bartenders and other service workers. The union representing these workers, UNITE HERE, has been in contract negotiations with Marriott since September. After an agreement couldn’t be reached, many locals across the US voted to authorize a strike.

Why Are Marriott Workers Are on Strike?

The main demand from the workers, heard in various chants on the picket lines has been “One job should be enough.” Due to the low wages, many of the hotel workers have to work multiple jobs to make a living and Marriott has been cutting back workers’ hours. Another demand has been to decrease the workload, a shared concern of many faculty here at our district! UNITE HERE has also bargained for increased control of the processes of automation (e.g. self check-in stations; see “Hotel Workers Fret Over a New Rival: Alexa at the Front Desk” N.Y. Times 9/24/18). Finally, a major demand has been for increased safety protections, in particular protections against sexual harassment and violence. In light of the #MeToo movement, women have been fighting back against sexual harassment and violence, and the women workers at Marriott are no exception. They have taken up this fight at the bargaining table and on the picket lines, which is very significant, especially given that the hospitality industry’s workforce is made up mostly of women. 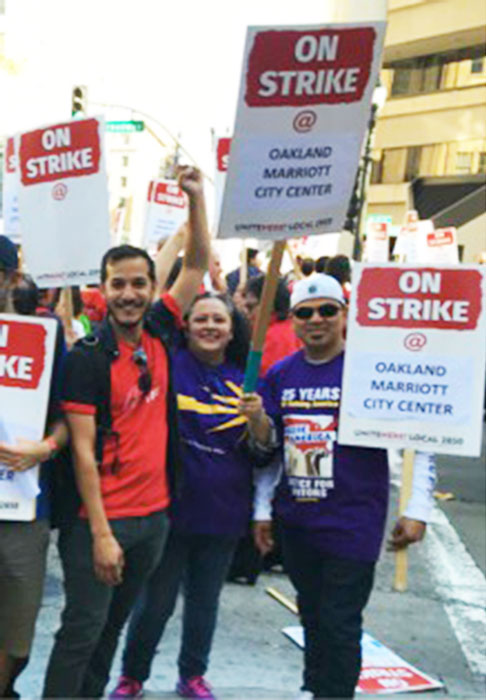 In 2016, Marriott International became the largest hotel company in the world after it purchased Starwood Hotels, surpassing the Hilton chain with more than 6,700 properties worldwide. Today it includes not only the Marriott and Starwood brands, but also Ritz-Carlton, Sheraton and Renaissance Hotels. This giant of the hotel industry is currently valued at $49.4 billion and in 2017 alone made $3.2 billion in profits. While the average pay of housekeeping workers is around $10/hour (a yearly salary of $20K), Arne Sorenson, the current CEO of Marriott International, receives a total annual compensation of $13.3 million.

In order to help Marriott workers and their union win their contract, UNITE HERE has called on individuals and organizations to take a pledge to support Marriott hotel workers by not eating, sleeping or meeting at any Marriott during a boycott and/or strike, and to respect women and not sexually harass hotel workers. You can sign the pledge by visiting their website at: marriotttravelalert.org/sign-the-pledge.

Photo above: AFT 1493 Executive Secretary, Paul Bissember (in red), joined the demonstration in support of the Marriott workers strike in Oakland on Saturday, October 20th

In addition, the union has called for national days of action. On Saturday, October 20th, in San Francisco, San Jose, and Oakland thousands of Marriott workers and their supporters took to the picket lines, and then to the streets to stand in solidarity with the UNITE HERE service workers. In Oakland, the picket lines were filled with union workers and activists from many sectors of the Labor Movement including the Berkeley Federation of Teachers (BFT), International Alliance of Theatrical Stage Employees (IATSE), janitors from the Service Employees International Union-United Service Workers West (SEIU-USWW), several Teamsters locals, and the California Nurses Association, among others. The San Francisco Labor Council, United Teachers of San Francisco and the Berkeley Federation of Teachers have all passed resolutions supporting the strike. Even more, some unions like the United Educators of San Francisco are donating to the union strike fund $100/week.

Let’s continue to stand in solidarity and support the Marriott workers in their strike for dignity, respect, and improved livelihoods. 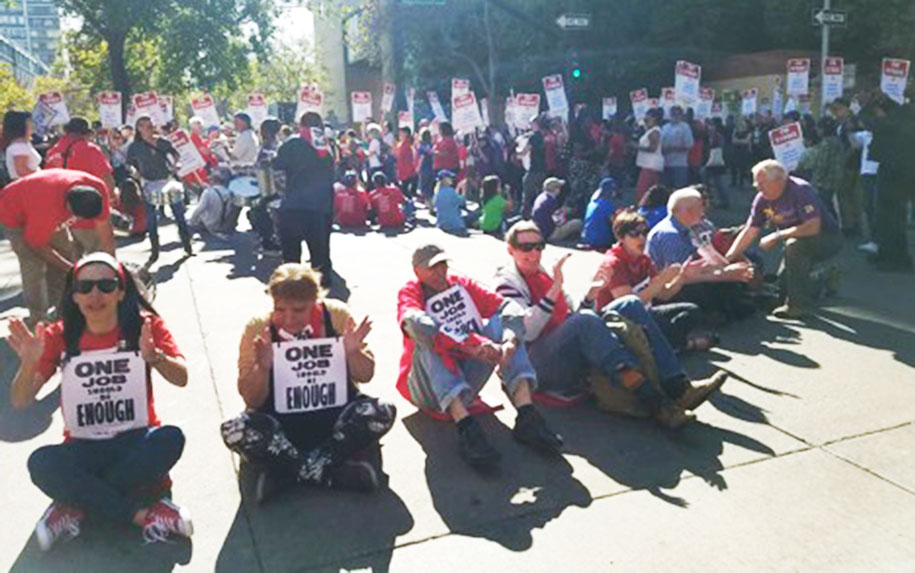