The California Federation of Teachers celebrated 100 years of advocacy for teachers and school staff on March 22-24 at its annual convention in Los Angeles. Six members of our union attended the three-day event: Paul Bissember, Nina Floro, Katharine Harer, Monica Malamud, Joaquin Rivera and Jessica Silver-Sharp. From large assemblies to smaller workshops and committee meetings, we were inspired, exhorted, educated and given the knowledge and tools we’ll need to continue the fight for education in California.

Changing of the guard

At the convention, we bid goodbye to CFT President, Josh Pechthalt, who led the union for eight years, and elected former Secretary

Treasurer, Jeff Freitas, to be the new CFT President, along with Luukia Smith, as incoming Secretary Treasurer. (Smith and Freitas are shown in photo at left.) Smith comes from the ranks of classified workers and currently serves as President of the Council of Classified Employees. The election of a classified colleague to the top leadership of CFT is a first, and it was met with clamorous approval. Another big change was ratified at the convention: going forward the California Federation of Teachers will have a new name that encompasses all of its members: CFT: A Union of Educators and Classified Professionals.

During the Saturday general session we heard from Guest Speaker, Nancy MacLean, (in photo at left) historian and Professor of History and Public Policy at Duke University. MacLean talked about the dark campaigns bubbling just under the surface of our country’s political landscape. Her new book, Democracy in Chains: The Deep History of the Radical Right’s Stealth Plan for America, sheds light on those who want to “enchain democracy and discredit government so the market can rule and undermine collective policy.” She laid out the frightening story of the Koch brothers’ influence: funding hundreds of organizations around the country, establishing right-wing centers at over 400 universities and controlling local political campaigns, such as Scott Walker’s devastating election in Wisconsin in 2010.

“The ultimate Koch end game is the radical transformation of our government and legal systems.” They want to impose total personal responsibility (think charter schools) and ultimately destroy public education and social security, privatize public resources and advance voter suppression. “They want an America like 1900 with no regulations, no social security or Medicare. They want to roll back the 20th century.” As grim as this scenario sounds, MacLean ended on an optimistic note: “Why do they use stealth? Because the radical right knows the majority of this country won’t support their vision.”

Story of the L.A. teachers’ strike 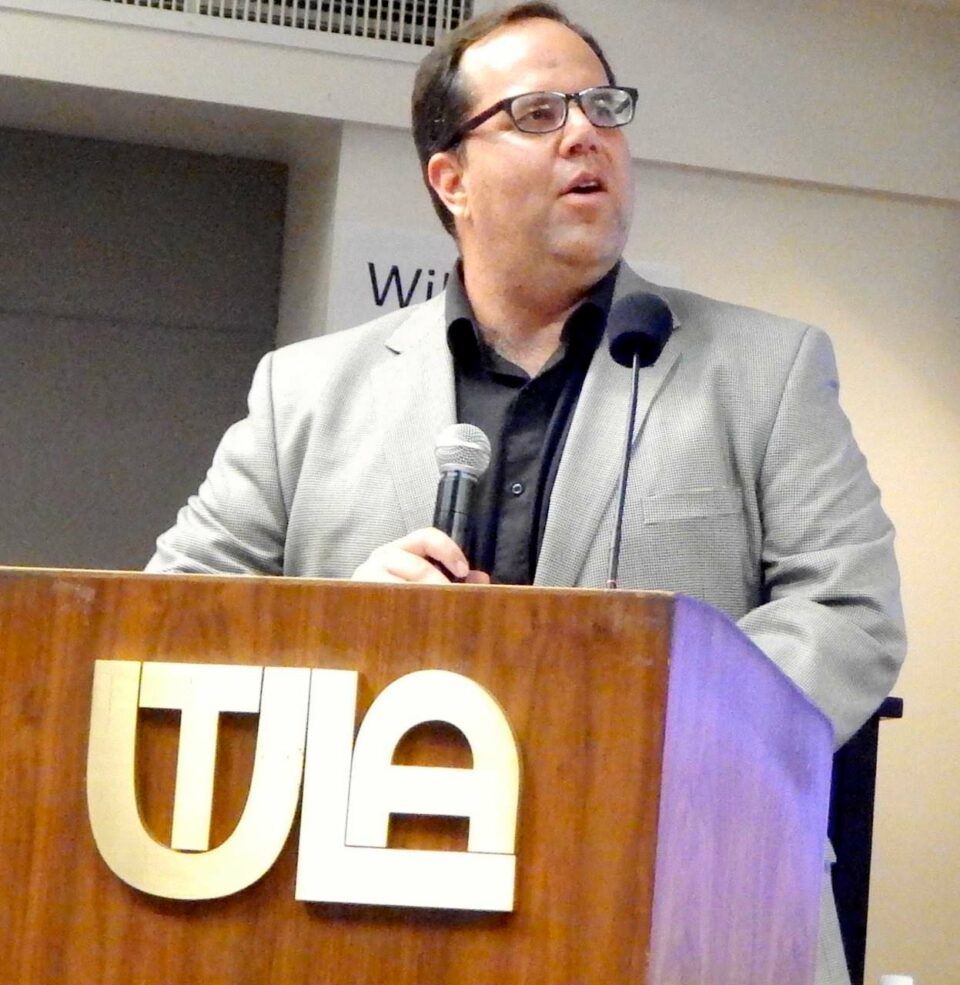 So what’s the solution? The same as it’s always been — as Joe Hill famously told us: Don’t mourn, organize! It was exciting to hear about the recent L.A. teachers’ strike from Alex Caputo-Pearl, (in photo at left) the President of UTLA. L.A. joined the wave of teachers’ strikes that have rolled across the country in the last couple years, but it wasn’t quick and it wasn’t easy. It took their union four years of focused organizing to get to the point where they could pull off a successful strike and bring their members and community along with them. According to Caputo-Pearl, “Parent and community work was at the TOP of our organizing strategy. They were involved from the beginning.” The union’s three biggest issues: underfunding, privatization and racism.

L.A. parent and strike supporter, Janae Tyler, took the stage with Caputo-Pearl to talk about her involvement. She said in the past, when she would speak up about conditions at her child’s school, teachers would stick notes in her pockets because they were afraid to speak up: “The L.A. school district has a history of dividing parents and teachers,” Tyler said, but the recent strike unified them and proved that they could create positive change if they worked together. Fifth grader, Aryana Fields, (in photo at left) left many of us with tears in our eyes and big smiles on our faces when she stood up with her guitar and sang “Strike Song.” She wrote the song during the teachers’ strike and it went viral on social media. “This is a strike song,” she sang in her beautiful young voice. She asked that her teachers be treated fairly because they do so much for her everyday. 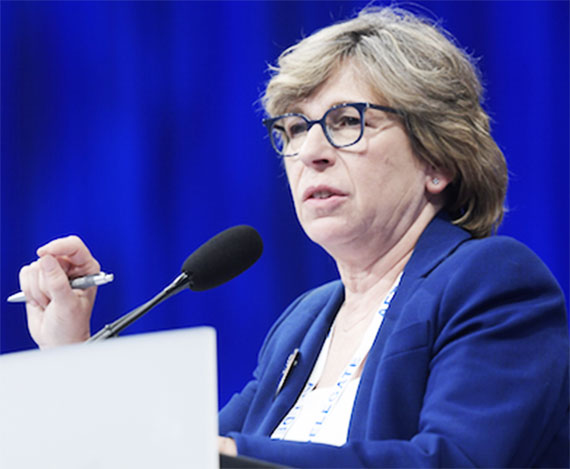 It wouldn’t be a CFT convention without a visit from national AFT President, Randi Weingarten, (in photo at left) who flies without a net when she speaks – no discernable notes, lots of positive energy and the ability to see the Big Picture. Here’s a fun fact: Weingarten told us that after the Janus decision came down, AFT removed 84,000 members who were signed up as fee payers off their roles. Today, not even a year since Janus, AFT has 100,000 new members! Still, she reminded us that only 7% of the U.S. is unionized, an all-time low. Although Weingarten said we are in “a new Gilded Age” where the 400 richest Americans own more wealth than the bottom 150 million adults, she told us that unions are the “carrier pigeons for a better life.”

One of the ways we can improve the lot of education in California is to reform Proposition 13, and the CFT is working hard on a new initiative titled, Schools & Communities First, which would fix the commercial property tax system and raise $11 billion a year for schools and communities. One half of the revenue gained would go to K-community colleges and the other half to local governments, cities and counties. This is not a new tax; it restores the pre-Prop 13 rates and exempts homeowners. It’s all about commercial property tax reform. Huge corporations like Disney and Chevron, for example, have been under-taxed since Prop. 13 by hundreds of millions of dollars while California ranks 41st in per-pupil spending. This is an even more shocking fact when you consider that California has one of the richest economies in the world. To learn more about the initiative and to get involved, go to SchoolsAndCommunitiesFirst.org.

Taking to the streets

Our group of six spread out and attended different workshops and committee meetings during the three days, but I have to confess that one of the most inspiring events for me wasn’t on the agenda of the convention. I received a text from Paul Bissember, our union’s 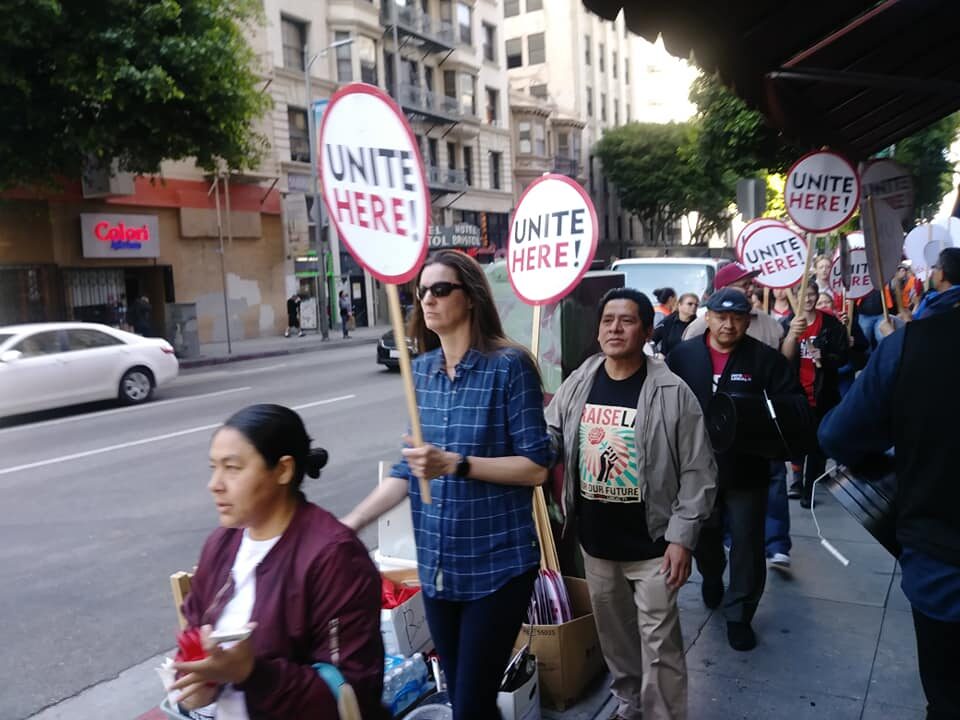 Executive Secretary, on Friday afternoon inviting me to go with other community college folks to join a protest in front of a nearby hotel. UNITE HERE Local 11 has been at the negotiating table fighting for better working conditions for hotel workers, and that afternoon they were gathered to protest the firing of one of the hotel staff at the Freehand, a boutique downtown hotel. (photo at left) Clara was fired because she spoke out about the unfair conditions at the Freehand. Paul and I, along with union leaders from Peralta Federation of Teachers, walked over to the hotel, grabbed skillets and drum sticks, and began pounding and chanting with the hotel workers and their supporters: “Bring Clara Back! Bring Clara Back!” Hotel workers spoke in Spanish and English about their situation and the protest was well attended and wonderfully loud. The energy was amazing and it felt great to lend our support to their struggle. I returned to the teachers’ convention ready for action!

A few impressions from my first CFT Convention

AFT 1493 Secretary, Jessica Silver Sharp (in photo below) attended her first CFT Convention this year. Below are a few of her impressions. -Ed. 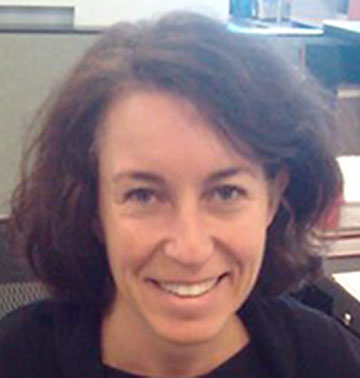 Being part of the process was new for me. First AFT 1493’s Monica Malamud’s higher education committee proposal was presented in session. Proposal wording, syntax and grammar were tediously analyzed by folks who were clearly English professors. The proposal was then debated (and re-haggled by more instructors) before hundreds of members on the convention floor, who finally and unanimously adopted the resolution to be brought to California legislators. It was like School House Rock in action!

I was able to catch most of an UndocuAlly session for instructors interested in working as allies for their institutions’ Dreamers. The session was led by a group of energetic counselors from Rio Hondo College. From comments from audience members I learned about an informal group of librarians, including adjuncts, doing exactly the type of activist work I’ve been involved with at Skyline’s Dream Center. While I knew I couldn’t be the only librarian doing this, now I can connect with a specific community of librarians using their libraries as safe spaces and information platforms for supporting California’s thousands of college Dreamers.