In many ways, the SMCCD budget is an objective and empirical measure of its priorities. To that aim, I’d like to quickly summarize some trends in the budget over the last few years. The data will extend up to the 2019-2020 school year, which is the most recent year that much of that data was available for.

Starting with some good news.

SMCCCD revenues increased 83% between 2009 and 2019. This in part reflects our unique status as a basic aid district. 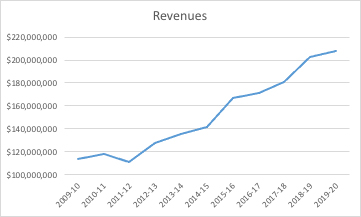 In short, the state of the SMCCD budget is healthy, especially in comparison to other districts in the state.

That health is reflected to some degree in the trajectory of our administrative salaries. Between 2012 and 2019, chancellor and vice chancellors’ salaries increased by an average of 90%

Unfortunately, this effect has failed to trickle down, as faculty salaries only increased by an average of 27.5% over the same period.

Below, you will find a table comparing part-time faculty compensation for a 3-unit class between SMCCD and nearby districts. This table illustrates the fact that SMCCD ranks particularly low in its pay for part-time faculty.

I’ve tried to paint a very streamlined picture with the brief amount of time I have, but it’s important to note that the budget and salaries really are very complex and nuanced. These are difficult numbers to compare directly (part time, full time, admin). AFT would like to address these figures in more detail in a future agenda item.

In closing, faculty (both full-time and part-time) are the contact point between our district and the community. We are the faces students see when they come to class every day. However, these figures show that, objectively, faculty are not prioritized in a way that reflects the role they play in this district’s success and the success of our students.