The California housing crisis has begun to spur struggles to make the demand for housing as a human right a reality. In Oakland, where homelessness has doubled in the last two years, four homeless and marginally housed mothers and their children occupied an empty investor-owned house to provide shelter for their children and draw attention to the need for the city and state to solve the housing crisis. The Moms4Housing movement has drawn attention to the approximately four vacant housing units for every homeless person in our city, putting a spotlight on the role of hedge funds and other real estate speculation in driving the housing crisis. Oakland is now a “hedge city,” a new form of corporate control, identified by the United Nations Special Rapporteur on Adequate Housing. This category includes Hong Kong, Vancouver, London, Chicago, Los Angeles and Oakland just to name a few. In these cities, hedge funds, which are financial corporations that make speculative bets, wind up owning massive amounts of housing, which drives up the prices of the rest. The example of Moms4Housing is one that unions and communities can follow – we must confront corporate control if we are to defend our members’ human rights to housing. 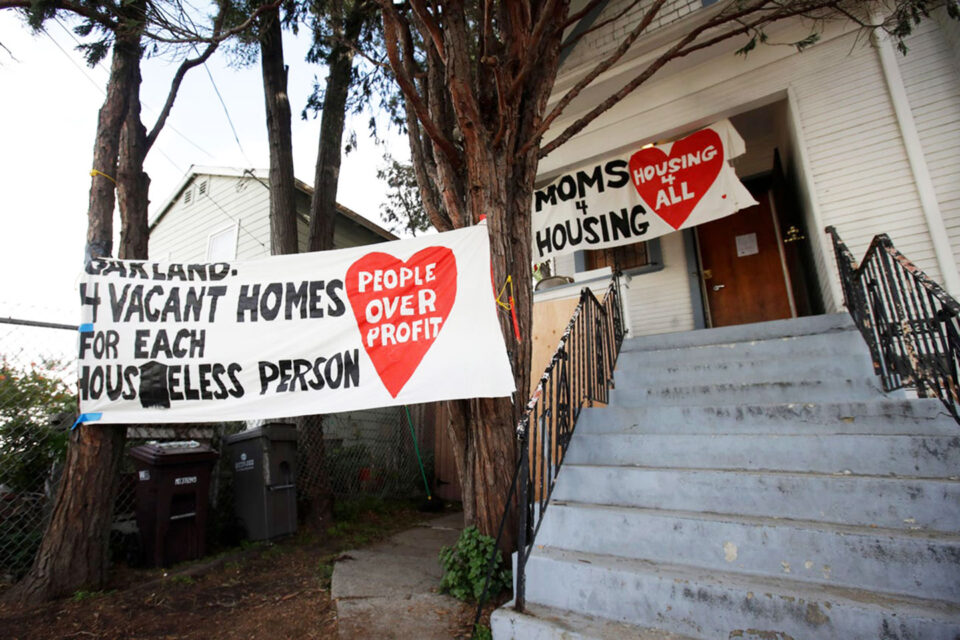 From “cost burdened” to homeless

The epidemic of evictions, foreclosures, homelessness, and other housing insecurities is national, but California is particularly hard hit, and many teachers, college instructors, students and their families are struggling. In California, over half of renters pay over one third of their income for housing, and over a third pay more than half of their income. These people and families are considered “cost burdened” and may have difficulty affording other necessities including food, transportation and medical care, according to the Department of Housing and Urban Development, which also notes that a family with one full-time worker earning the minimum wage cannot afford the local fair-market rent for a two bedroom apartment anywhere in the United States. As the gap between income and housing costs grows, more and more people and families are being forced into homelessness. Nationally, HUD estimates that over half a million Americans are homeless, 17 out of every 10,000 citizens. In California, the rate is significantly higher, with 33 homeless out of every 10,000.

The #RealCollegeCalifornia Basic Needs Summit was held Dec 6, 2019 at Laney College, an amazing gathering of college faculty, administrators and student services professionals focused on best practices to address food and housing insecurities faced by California students. The California Community Colleges #RealCollege Survey (conducted in 2016 and 2018) found that 50% of students were food insecure, 60% were housing insecure, and 19% were homeless. In our district, Peralta, a 2017 survey found that 84% of students district-wide experienced at least one form of housing insecurity or homelessness and 30% had one or more experience with homelessness. Peralta District Chancellor Regina Stanback-Stroud shared welcoming words at the Summit, including that we cannot turn an unseeing eye to poverty and there is enough housing and food available to provide for basic needs, but there is not the political will to meet these very real needs. I completely agree with her. What was not mentioned by Chancellor Stroud and is less understood by college and government leaders is that California Community College instructors, like their students and their K-12 counterparts, also experience housing and other basic needs insecurity that must be addressed. For example, a contingent part-time faculty colleague recently revealed that he is living in a small room (basically “a closet”) with no heat. This committed instructor chose this living condition over living 2 hours away from his campus. He is not alone – in an informal survey of 166 part-time faculty in the Peralta District, 51% described themselves as housing insecure, 1.2% described themselves as homeless or unhoused, 61% described themselves as income-insecure, either living paycheck-to-paycheck with no savings at all or with significant debt, and 16% reported they are receiving welfare benefits other than unemployment. 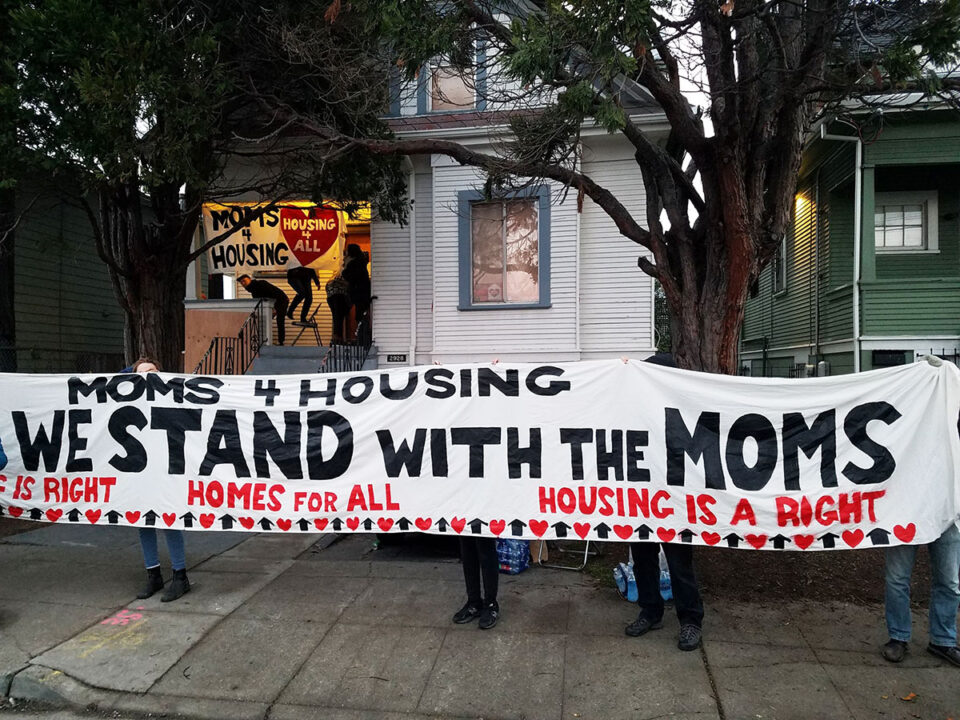 Nationwide, K-12 teachers on average have to spend 50 percent of their income on rent, putting them in the category of the “severely cost burdened.” In some parts of the country, living where you teach is literally impossible. More than 1.5 million public school students reported experiencing homelessness during the 2017-18 school year according to a study by the National Center for Homeless Education, with California at the forefront with 263,000 students. The number of homeless students in the US is the highest in more than a decade. It has increased 15% in the past three years, including 137% more children living on the streets. (The Guardian, Feb. 4, 2020)

Moms4Housing made it clear that we do not have to live like this in the wealthiest state in the wealthiest country ever to exist. They occupied a corporate investor-owned property, raised awareness of the role of real estate speculation in the housing crisis, lost in eviction court, but won in the court of public opinion, experiencing wide support from the Oakland and broader Bay Area community. They are now are negotiating to purchase the house through the Oakland Community Land Trust — because their just demands and community organizing, which included support from the Alameda County Labor Council, created effective public pressure that got Governor Newsome and Mayor Schaaf to pressure the Wedgwood Corporation to sell. Faculty, staff and students at Laney College have united with community activists through the Laney College chapter of the Poor People’s Campaign and are playing our role to raise awareness through regular teach-ins and supporting actions and movements for housing and other basic needs, such as Moms4Housing. 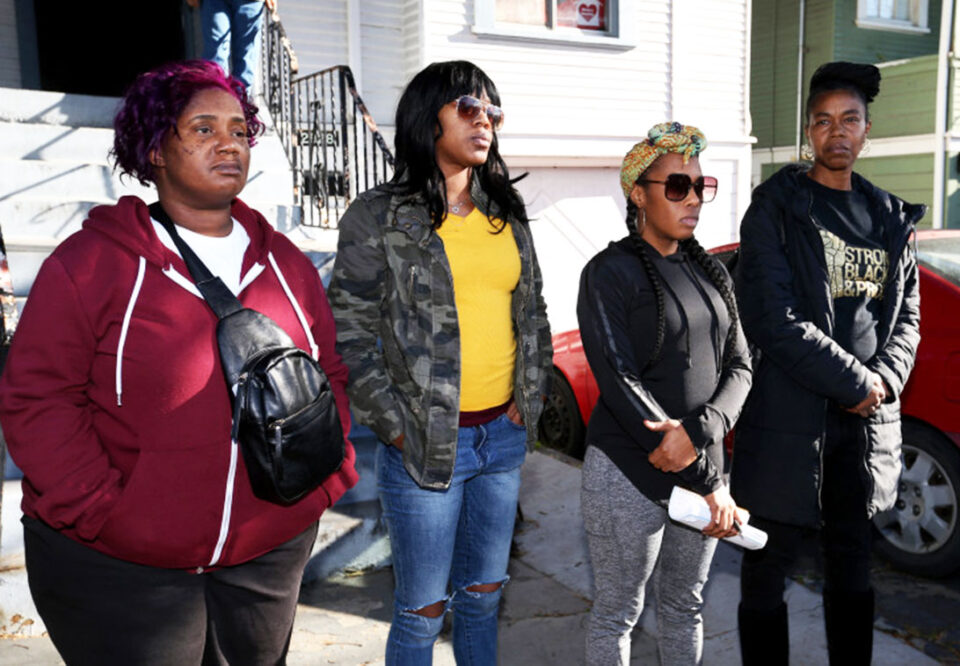 Let’s learn from Moms4Housing. What are the public policy choices when a city has more vacant units than homeless residents? And if housing units are being kept vacant and off the market to bring in greater financial returns to speculators, while children sleep in the streets because their parents cannot afford the cost of available housing, is this acceptable? The question is not one of resources; it is one of political interests and power. The UN Special Rapporteur on Housing visited Oakland and San Francisco and questioned why a wealthy state like California and these Bay Area cities have not spent enough funds to provide adequate housing. She noted that the Bay Area is home to some of the wealthiest companies in the world, including Apple, Facebook, Google, Wells Fargo and Chevron. Fair taxation of these corporations could easily provide low-cost housing and increased wages for public employees. The Schools and Communities First ballot initiative will do this. Yet, workers, families and our unions must also hold elected officials accountable to use the funds available to meet basic human needs. The California state budget is estimated to reach $26 billion in reserves by summer 2021. (L.A. Times, Nov. 20, 2019) The people of California need this funding – supposedly set aside for a rainy day – NOW. For the students, teachers, and families of California, the housing crisis is a tsunami leaving tens of thousands unsheltered. Teacher and faculty unions working together to apply political pressure with students, families, and community struggles for housing as a human right, such as Moms4Housing, can get the quality housing and schools that our communities deserve.