On January 22 an agreement was reached between United Teachers Los Angeles (UTLA) and the LAUSD school district, ending a pivotal six-day strike for both economic and social justice. The historic agreement included many of the key goals brought by the UTLA bargaining team, including strong language reducing class size, increased staffing of nurses, counselors and librarians, limits on testing, and the establishment of community schools. Rather than simply fighting for higher compensation (although they did win a 6 percent pay rise), L.A. teachers struck for “the schools LA students deserve.” UTLA leaders called the strike “a battle for the soul of public education.”

After decades of austerity, cutbacks, privatization, testing, and teacher-bashing—by politicians and the media—the UTLA strike has taken the nation-wide fightback by public teachers to a new level. The L.A. strike called into question the drastic underfunding of public education in L.A. and throughout California (and beyond) and also challenged the widespread growth of charter schools. 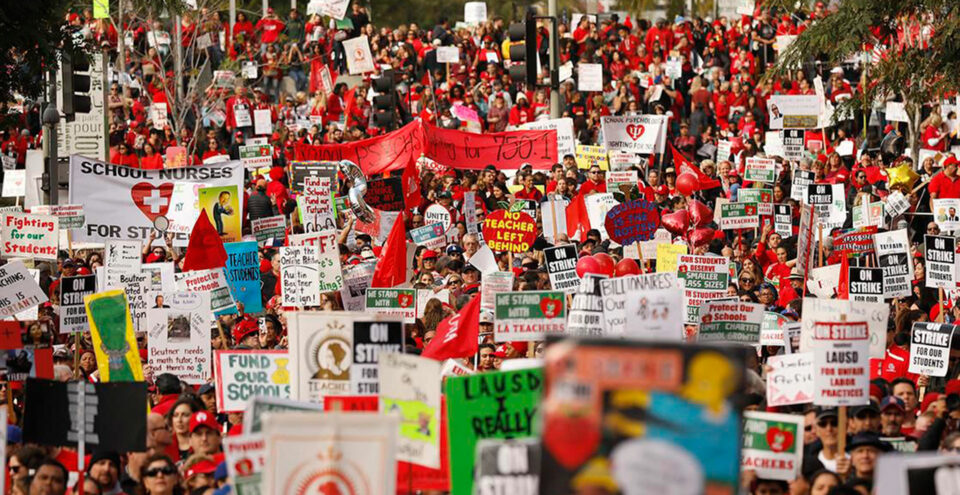 In 2005, there were 58 independent charter schools in the district. Today, there are 221, representing the highest concentration of charter schools of any district in the nation. One of every five LAUSD students now attends a charter school.

UTLA has criticized the excessive use of charter schools because they funnel public money into private hands and cherry-pick students, while not serving those with the highest need. L.A. School District Superintendent Austin Beutner—a former investment banker with no background in education—developed a plan to divide the L.A. schools into “portfolio districts,” to replace traditional public schools with a market-based system of school management. The push for privatization in L.A. has been mirrored nationwide and led by many of the same education “reformers” and tactics as have been used in Detroit, New Orleans, and Newark — cities that have had their public school districts broken down (with the support of billionaire philanthropists such as real-estate developer and financier Eli Broad, the Bill and Melinda Gates Foundation and the Walton Family Foundation.)

UTLA President Alex Caputo-Pearl explained that the state charter school law “is very permissive. We think the original intent of charters was right on, with small experiments serving high needs students and feeding lessons back into the system. But when it has been taken over as a vehicle by billionaires to privatize the system, not serve all students, not serve special education students equally, not serve English language learner students equally, not serve the chronically truant students equally, then you’re just setting yourself up for a two-tier system with charters draining $600 million per year out of the LAUSD. We can’t have that.”

On the first day of the strike Gov. Gavin Newsom seemed to respond to UTLA’s call for a moratorium on charter schools when he announced that he supported placing more regulations on charters and called for the legislature to take up the issue. 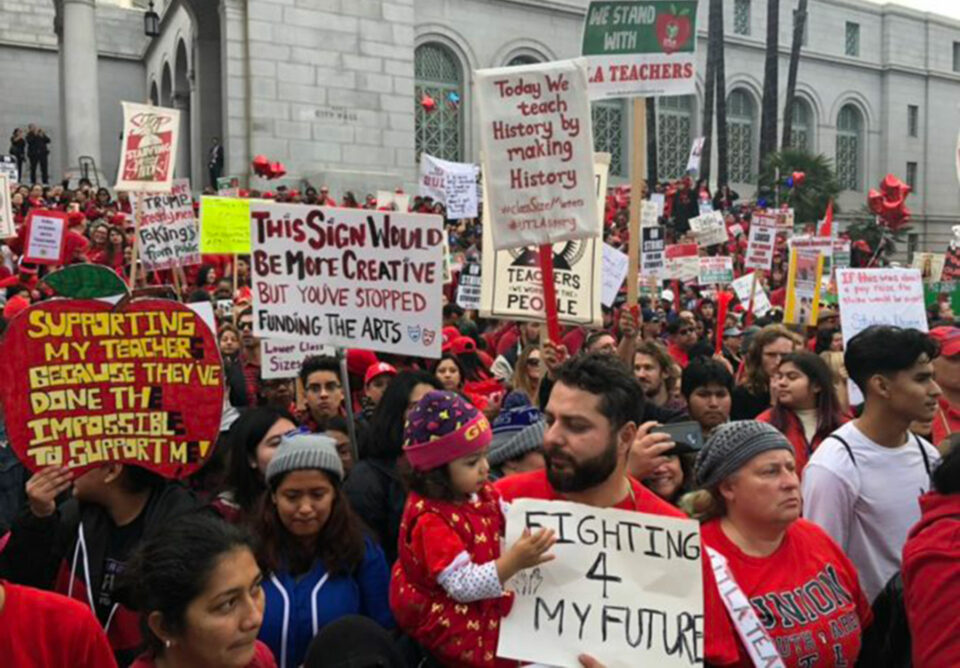 Striking for racial and social justice

LAUSD students are 73 percent Latino and 15 percent other nonwhite populations and the union focused on racial justice which is critical to so many of their students: undocumented students, students who are harassed by police in their neighborhoods, and students being gentrified out of their homes. The union’s labor-community alliance approach included bargaining on “random” searches of students on campus, helping to provide funds to DACA recipients to renew their papers, and calling for the district to establish an immigrant-defense fund to support families.

“Fighting about class size and a full-time nurse in schools in a district that is overwhelmingly kids of color is a racial justice issue. Period,” said Caputo-Pearl. But it has also been important, he said, to take on struggles “that have challenged our members to see our union as, yes, the vehicle for teachers’ rights, but also a broader vehicle to fight for the folks who are most important allies, our parents and their kids.”

Time to fully fund our schools

The impact of the successful UTLA strike represents a sea change for the state of California, as there is now strong momentum to raise critical revenue needed to fully fund our public schools and to address the broader issues of economic inequality. CFT President Joshua Pechthalt laid it out clearly: “The state must act. California is the 5th largest economy in the world, but we are a dismal 43rd in the nation in per-pupil spending. Without fully funded schools, California students will continue to be denied the education they deserve. And without dramatic action in Sacramento, teachers and school workers will likely be out on the picket line very soon in school districts throughout the state.”

The Schools and Communities First initiative would take a significant step to start addressing the underfunding of our schools. Along with community and parent allies from throughout the state, the CFT was instrumental in qualifying the initiative for the November 2020 ballot. The initiative would close a loophole in current tax law that allows legacy commercial property owners to evade paying property taxes based on fair market value and would restore more than $11 billion per year to California schools, community colleges, health clinics, and other vital local services. “But we should not stop there,” Pechthalt asserted. “All options to bring stable, long term revenue back to our schools and colleges must be considered, including taking a strong look at the carried interest loophole and other corporate tax breaks that funnel money out of our schools in order to pad corporate profits.”

“These striking teachers know that public education remains a place where people come together in person — students, teachers and support workers, and parents — to generate and renew our society by preparing children to participate in the workplace and our democracy… these teachers are younger, more politicized and ready to fight for what they believe in. Saddled with college debt and deteriorating economic prospects, they are nonetheless energized by the broad political mobilization occurring in the resistance to Trumpism. More of them call themselves socialists than we have seen since the 1930s… At a time when our nation’s top leaders are flagrantly cynical about democracy, the people who do the work to continuously repair and maintain our democracy are saying something different. They say: ‘Give us the resources to educate our students, and we will give you a better future.’”
[Fred Glass, S.F. Chronicle]

“Teachers have emerged as the leading voice for a different way of doing things—and a different society. This is a society that values children for their differences, not their standardizable skills; that takes back public spaces for the public; that values play as well as work; that wants resources distributed equitably.”
[Sarah Jaffe, The Nation] 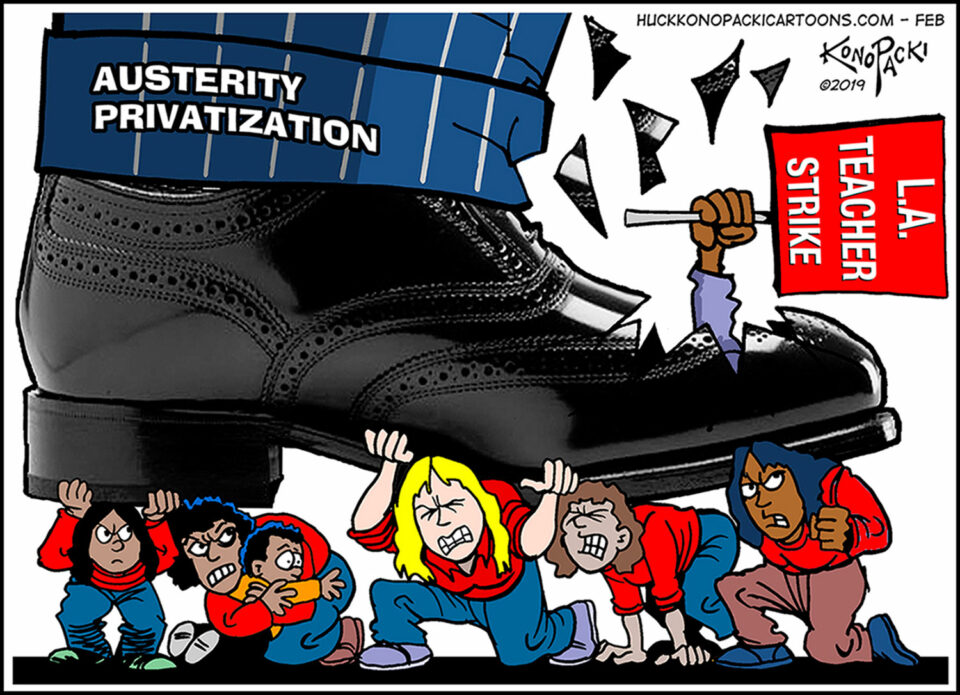