Help counter the Feds’ efforts to undercount;
Unions working to get all residents counted

Labor unions, community and faith-based organizations are working with San Mateo County and state Census officials to count all county residents—regardless of immigration status—during the 2020 Census. 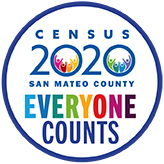 dministration, on the other hand, seems intent on ensuring an undercount. While the Census form will not include a citizenship question, the Administration’s anti-immigrant rhetoric in California, where over a quarter of its residents are foreign-born, has sown fear and confusion in local communities when it comes to who is supposed to fill out the Census. In addition, the Census Bureau does not have an experienced director, and funding and staff have been cut.
Finally, the 2020 census will be the first in which most Americans will use the Internet to complete an online census form. The Census Bureau’s reliance on the Internet will be a problem for lower income households without a high-speed Internet connection.

The Labor Council is working with its member unions, including AFT, to ensure a complete and accurate count next April. For example, public school teachers can integrate a Census curriculum into their fifth, eighth, eleventh and twelfth grade lesson plans. At Skyline College, SparkPoint, in partnerships with faculty and student leaders, plans to disseminate Census information as part of its programs on financial self-sufficiency.

To get involved in efforts to reach out to students at our community colleges, through the classroom or in partnership with student organizations, please email Bradley Cleveland, the Labor Council’s Census Project Manager, at bfcleveland@gmail.com, or text him at 650.235.4969.