Understanding the “migrant caravan” and building support for immigrant rights

On Sunday, November 25th, over the Thanksgiving Holiday weekend at the border between California and Tijuana, the US Customs and Border Protection used militarized repression, including deploying tear gas and firing rubber bullets, against a group of asylum-seeking Central American migrants and refugees who were part of the “migrant caravan.” In order to better understand the reasons and root causes of Central American migration to the US, and to learn about ways to stand in solidarity and support migrants, AFT 1493 interviewed Christopher Lopez, a Bay Area immigrant rights activist who has been part of organizing local, regional, and international solidarity efforts relating to the “migrant caravan.” 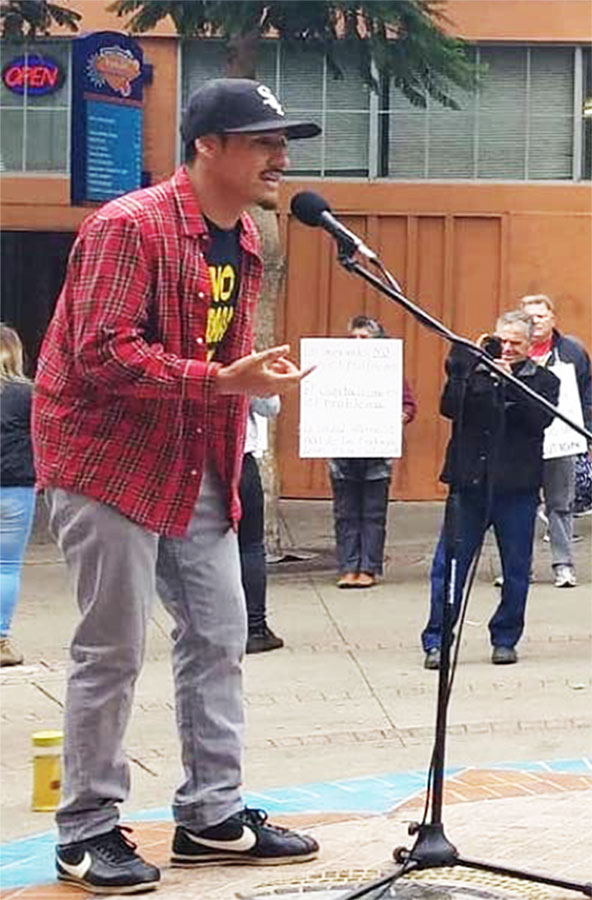 Christopher Lopez was the MC for the International Day of Solidarity with the Migrant Exodus in Fruitvale, Oakland on Sunday, Nov. 25

AFT 1493: Could you tell us about how you got involved with immigrant rights work?

CL: I am the coordinator for the East Bay chapter of the School of America’s Watch. We are a grassroots organization that works in solidarity with Latin American partners to close the US military base SOA/WHINSEC [School of the Americas / Western Hemisphere Institute for Security and Cooperation] and change US foreign military policies. I got involved with immigrant rights work through my activism against the regional drug war in Latin America and advocacy work for refugees of US foreign policies.

AFT 1493: Can you tell us a little about the migrant caravan? How and where did it form, how many people have participated, what was the route, what are the goals, and how has it been organized?

CL: The migrant caravan that captured national headlines in October brought international attention towards a form of migration that has been forced for the past couple of years. The assembling of migrant caravans emerged as an alternative to the dangerous, hypermilitarized route created at the Mexico – Guatemalan border. Repressive port of entries were evaded as migrants were forced to take routes intercepted by Mexican police, who are notorious for violating human rights, or life-threatening cartel networks.

Friends from Pueblo Sin Fronteras have commented on how this unity, among migrants, is encouraged from the fear they collectively share considering their suffering these past 48 days. What began as 300 people gathering in San Pedro Sula, Honduras, manifested into over ten thousand Central Americans seeking the opportunity to exercise their international right to apply for asylum at a US port of entry. For several different reasons, many have been deported, many have self-deported, many stayed across different Mexican states, numbering in the thousands.

AFT 1493: Could you talk about Pueblo Sin Fronteras (People Without Borders) and their role in supporting the migrant caravan?

CL: I can’t speak too much on Pueblo Sin Fronteras, since I have never been with them on the ground in Central America or Mexico, but I have been organizing with them in the Bay Area. They have accompanied migrants and caravanas for over five years with the intention of providing protection, legal assistance, and some human rights education. They are volunteers, unpaid, and truly driven by their hearts and profound solidarity. It has been amazing to see them live stream the people’s assembly they helped facilitate to validate the leadership these refugees and migrants are willing to take in this fight.

AFT 1493: Could you describe the situation in Honduras that has forced so many people to migrate? What are the reasons or root causes of Central American migration to the US?

CL: The United States continues to perceive Latin America to be its backyard, and Central America as its personal provinces. Throughout the 20th century, the United States and its capital intervened in Honduras’ economy and government to foster a financial and political network submissive to a particular foreign policy. Honduras was transformed into a base of operations during the period of the Central American civil wars in the late 1970s into the 1980s where violent and deadly counterrevolutionary paramilitaries were being trained and financed by the US government. This ushered in a repressive political climate where over 200 disappearances took place and thousands were forced to flee. A devastating hurricane, Hurricane Mitch, hit Honduras in 1998 which allowed them to qualify for Temporary Protective Status (TPS). This hurricane devastated the economy. However, the US support for the military juntas that ruled through the previous decades had corrupted government and foreign aid budgets – so the devastation among the working and rural class was structured to produce this result.

Most recently, I would reference the military coup that took place in Honduras on June 28th, 2009. Then Secretary of State, Hillary Clinton, supported a forced regime change orchestrated in collusion with the national elite fearful of a democratically elected government leaning towards the regional left. In 2013, the current President Juan Orlando Hernandez came to power, immediately militarizing the country, the same year San Pedro Sula became known as the most dangerous city in the world. Since then, he and his party have been involved in many corrupt scandals now coming to light: the millions stolen from the IHSS (Honduran Social Security Institute, 2015), the $12 million stolen from the Ministry of Agriculture and Livestock (2012), and the dozens of officials arrested for drug trafficking related charges, most recently the former president’s son, Fabio Lobo, and the president’s current brother, Tony Hernandez, both for importing cocaine into the United States. Not to mention, Juan Orlando Hernandez stole the election through a systematic attack on the electoral system. Since then, various caravans have fled the country, there has been a rise in political prisoners, and there is greater pressure to prevent the family of murdered environmental and indigenous rights’ leader Berta Cáceres’ to receive justice.

In short, a root cause is US military intervention that maintains military and right-wing dictatorships without considering its deadly repercussions; political violence, gang repression, economic oppression, and social discrimination.

AFT 1493: What have been the responses of the Mexican and Honduran governments to the caravan?

CL: The Honduran government immediately began criminalizing the caravan. The ruling administration claimed the migrants were politically motivated and financed (even accusing Venezuela) and offered no humanitarian assistance. Instead, they claimed the migrants were “volunteer deportees” and that they had 20,000 jobs available that to this date have not been offered or documented. The Mexican government responded with authorizing the federal and migration police to be extremely violent towards Central Americans who have sought to pass through Mexico en route to the northern border. The government of Enrique Peña Nieto announced its “Estás en Tu Casa” program, promising 2,000 pesos to some that qualified and claims of offering job employment in Chiapas and Oaxaca, which the president-elect AMLO (Andrés Manuel López Obrador) too has mentioned. More recently, it has been rumored that the incoming Mexican administration will accept the United States’ demand in having the Mexican government continuously detain Central American asylum seekers on the Mexican side of the border to prevent them from being legally processed in the US.

AFT 1493: Can you describe the local organizing efforts going on in the Bay Area in support of migrants’ rights? How can people learn more?

CL: The Bay Area has played a large role in the history of the Sanctuary movement that emerged in response to the refugees fleeing Central America during their civil wars. Solidarity networks emerged to attend to the same humanitarian needs our refugee brothers and sisters in Mexico need. They have been present alongside so many immigrant rights organizations, Central American student leadership, labor unions, and the refugee and migrant communities themselves. It is a beautiful moment and what is needed is time and space to be intentionally committed so a collective vision can be constructed. There are groups coordinating visits to the border, creating legal response networks, political education projects, a migrant welcome committee for migrant housing and employment.

AFT 1493: Do you have a message for community college faculty, staff, students and union activists who want to get involved in supporting migrants from the caravan?

CL: My message is: attend what is being organized in the community. I guarantee you will meet the organizations who have similar solutions and plans of actions we are all seeking to consolidate. We need to humanize the conversation to combat against the racist misinformation being spread around and that begins with our encounters.