The Accrediting Commission for Community and Junior Colleges (ACCJC) accredits two-year colleges in California and Hawaii. Sanctions imposed on colleges by the ACCJC in recent years have far exceeded the total sanctions by all other accreditation bodies in the country combined. On July 3, the ACCJC announced that they would terminate City College of San Francisco’s accreditation effective July 31, 2014. (For more on CCSF’s accreditation and responses to ACCJC’s actions, see below and see updated news links in “In the News“.)

A public forum on the question: “Is the Accrediting Process for California’s Community Colleges Fair and Accountable?” led by US Reps. Jackie Speier and Anna Eshoo, was held at City College of San Francisco on Nov. 7, 2013. Click here to view a video of the complete (2 hour +) forum. Click here to view a 20-minute condensed version of the forum.

Click here to read a statement by the CFT on solutions for the City College struggle, and what to do about ACCJC.

Recently SMCCCD Chancellor Ron Galatolo has spoken out publicly on the issue of the actions of the Commission. Click here to read Chancellor Galatolo’s views on the ACCJC.

Who actually runs the ACCJC? What is the basis for the huge number of sanctions they have been imposing? What laws govern the decisions taken by ACCJC and who oversees their actions? These are some of the many questions that were taken up in an eye-opening report, titled “ACCJC Gone Wild”, written by Martin Hittelman (left), former President of the California Federation of Teachers (CFT). The original version was published in August 2012, and numerous revised versions have been put out since that date, with the most recent revision released July 8, 2013 . The report extensively analyzes many issues concerning how the ACCJC operates and it is highly recommended reading for anyone involved in or interested in the accreditation process.  Download “ACCJC Gone Wild” here. Hittelman also maintains a website, Accreditationwatch.com, which includes “ACCJC Gone Wild” plus much more documentation exposing ACCJC’s rogue actions.

On April 30, 2013, the CFT filed a 298-page complaint with the U.S. Department of Education, which oversees the Commission, calling for the reversal of the ACCJC’s severe 2012 sanction on CCSF. CFT accused the Commission of violating state and federal laws and of engaging in conflicts of interest including the fact that the husband of Barbara Beno, the commission’s president, was part of a team evaluating CCSF in March 2012. The Commission responded to the CFT complaint with a report issued on May 30 which essentially denied any merit to the CFT’s charges (although it did not respond in any depth to the union’s complaint that the commission has violated federal and state laws in its dealings with CCSF.) CFT president Joshua Pechthalt released a press statement commenting on the Commission’s response that: “The dismissal of our complaint as ‘without merit’ by ACCJC is further proof that the agency overseeing community college accreditation lacks transparency and any capacity for self-critical analysis. We are extremely troubled by the way ACCJC has steered the accreditation process away from those values.”

For more background on the ACCJC’s actions and responses to them, see the following: 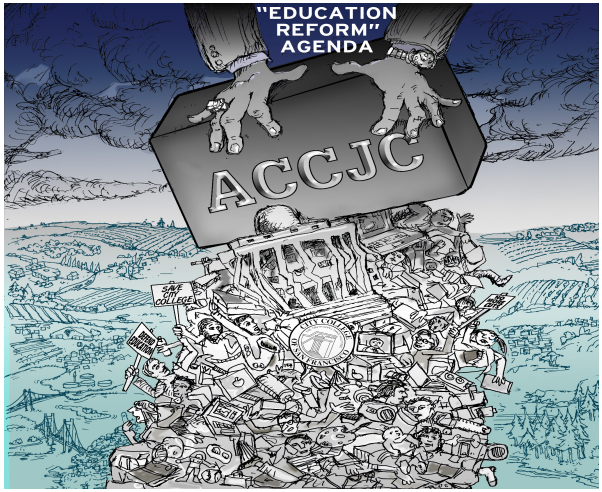 August 20, 2013— Why is Agrella defending ACCJC instead of CCSF? (BeyondChron)

July 12, 2013— City College of San Francisco has a year to prove it can govern itself (San Francisco Chronicle)

June 26, 2013— Union complaint in California has accreditors in the hot seat (AFT On Campus)