Two hundred and fifty buses full of college students from all over the state of California converged on Sacramento on March 14 for the yearly March on March in support of public education. The stakes are particularly high this year, given Governor Jerry Brown’s proposed budget, which cuts spending for state universities and UCs by $1 billion and spending for community colleges by $400 million, guaranteeing both fee increases and a reduction in services. 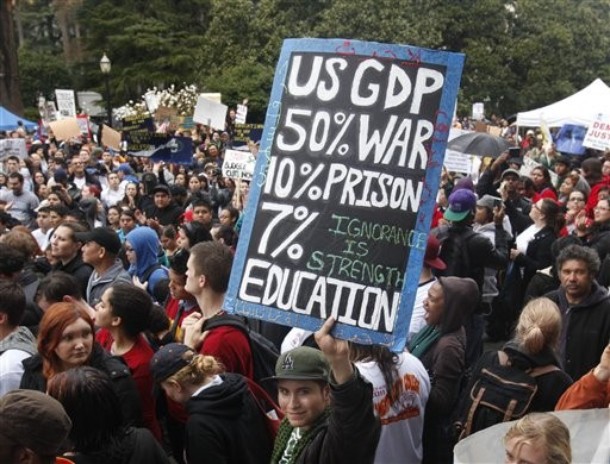 A crowd of some 5,000 stood in front of the capitol building in the pouring rain listening to speakers demand that Brown rethink his budget priorities and rescind the planned cuts. Representatives from different campuses called for the passage of the California Dream Act, an end to tax loopholes for the rich and corporations, and the opportunity to vote on an oil extraction tax—California is the only state that does not tax oil companies for extracting oil. Protesting students held signs saying “Tax the rich!” “Blame the bankers, not the teachers!” “Solidarity—from Sacramento to Madison with love” and “Support immigrant students—education for everyone!”

That this demonstration was only the beginning of the fight was made clear when a group of thirty students briefly staged a sit-in on the floor of the capitol rotunda, demanding to be allowed to enter the assembly chamber where their future was being discussed. State troopers moved quickly to block the entrance ways and keep out any additional protesters. They then told those sitting in that they would be arrested if they did not leave. The students decided to retreat, but promised to be back—and bigger.