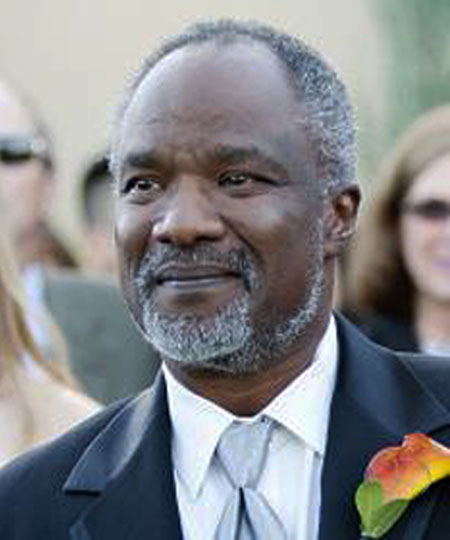 Cal Robinson, longtime Skyline College business and law professor, passed away on August 10, 2014, and will be sorely missed by Skyline and District colleagues. Cal was born in New Orleans, Louisiana, as one of six children. He studied at San Diego State University while serving as student body president, later graduating from UC Davis with a B.A. in Political Science. He went on to obtain an M.B.A. and J.D. at UC Berkeley. Two Skyline colleagues and friends–Katharine Harer and Jeff Westfall–share brief memories of Cal below.

Cal Robinson and I shared the second floor hallway in Building 8 for over twenty years.  Cal’s office was in a little cul-de-sac around the corner from where Nina Floro and I lived, and he often taught his Business Law classes next door to my English Comp classroom.  He’d walk in the door smiling and leave with students chattering by his side. Cal and I were work friends, and although we were in different divisions and only rarely found ourselves in the same meeting, we knew one another.
Cal was infinitely knowable.  He never hid behind an officious attitude nor was he distracted by overwork or campus politics, and he never lost his fundamental kindness. Cal was interested in everything:  in me, in the teachers’ union, in his family, in his students, in life. When we would talk before closing the doors of our classrooms, Cal was completely present – warm, sweet, smart and funny.
Cal often carried huge aluminum pans of homemade food to his classes, and I never saw him happier. He knew that feeding students is a good way to nurture — and educate — especially when the teacher takes the time to cook for his students.  The last day I saw Cal, in early June, we were both clearing out our offices – he was moving and I was retiring from full-time teaching.  Cal laughed and said, “You’re not really goin’, Kath?  You’re too young.”  I loved that he said that even though it wasn’t true.  I can’t imagine the world without Cal in it.

It is with sadness that I have learned of the passing of Professor Cal Robinson.  Prof. Robinson’s greatest moments on campus were in the classroom, but it was in a “shared governance” meeting early in our Skyline careers that Cal made a deep and lasting impression upon me.  A committee discussion had turned tense, is how I’ll put it, and Cal challenged the biases of the chairperson with a courage and insightfulness that demonstrated to every person in the room his quiet integrity.  Off campus, surely, Cal’s greatest joys were his children, and I am happy, selfishly, to have had him stand with me again years later – at my wedding.  Cal Robinson was a very good man, and he is missed.