Sue Broxholm, Skyline Math Professor, advocates for the end of the “Two-Tier system” that divides full-time and part-time faculty

Sue Broxholm has been teaching Math as a part-time instructor at Skyline College for over 20 years. In addition to teaching, Sue has been a long-time advocate and organizer for equitable pay, benefits and working conditions for part-time faculty.  In the interview below, Sue explains what the “Two-Tier system” is and why she has worked against it, as well as sharing a little bit about herself, including a surprise personal connection to Albert Einstein. 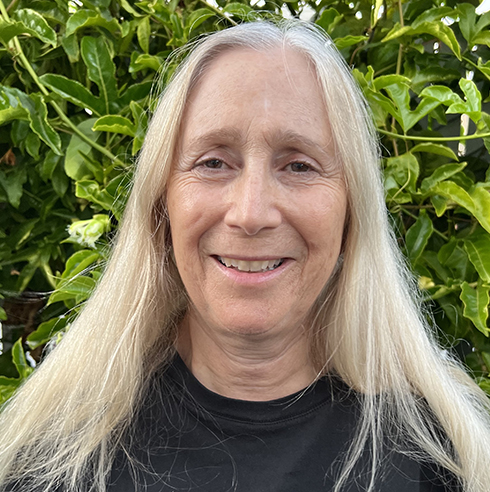 You’ve done a lot of advocacy to draw attention to the inequity of something called the “Two-Tier system” in higher education. What is the two-tier system? And what are some of the problems with it?

The two-tier labor system creates two different pay and benefit structures (or lack thereof) for existing and future employees.  Workers oppose the policy for several reasons, including that it creates disparities among workers for essentially doing the same job which can hurt morale and create animosity. At the community college level, two-tier refers to the division between full-time/tenure and part-time/adjunct faculty labor.

In all sorts of workplaces, from Nabisco and Kellogg to John Deere and Kaiser Permanente, employees have been united in their opposition to a two-tier benefit and wage system.  It’s time for community colleges to join the rest of the country in achieving normal equity for their workers.

Additionally, at California community colleges there is no real pathway to the upper tier.  Sadly, in our district there is not a strong record of promoting from within.  According to San Mateo District’s Human Resources department, only about 60% of full-time positions are filled internally.  Thus, we have many people of proven worth who have been stuck in lower positions for years.  After a while many adjuncts don’t even bother applying for full-time positions anymore.  In fact, there is no guarantee of an interview for someone who has been working in the district for years with good reviews when a full-time position opens up.  It’s unfair, terrible for morale, and a waste of human capital.

Tell us about some of the work you’ve done to achieve equity for part-timers, either in our union or elsewhere.

I have been involved in union meetings in which part-time issues were at the forefront.  I’ve also talked to administrators about the problems with the two-tier system and how important it is to get rid of it.  I’ve also gone to conferences put on by other faculty organizations such as Faculty Association of California Community Colleges (FACCC) and California Federation of Teachers (CFT).  Additionally, I have been serving on the Executive Committee of California Part-time Faculty Association (CPFA).

I have made several trips to Sacramento with colleagues and friends or by myself, to hand out fliers to people who work in the Capitol, legislators, and to the public about abolishing the two-tier labor system for community college faculty.  I have been heartened by how the public enthusiastically agrees with this goal! 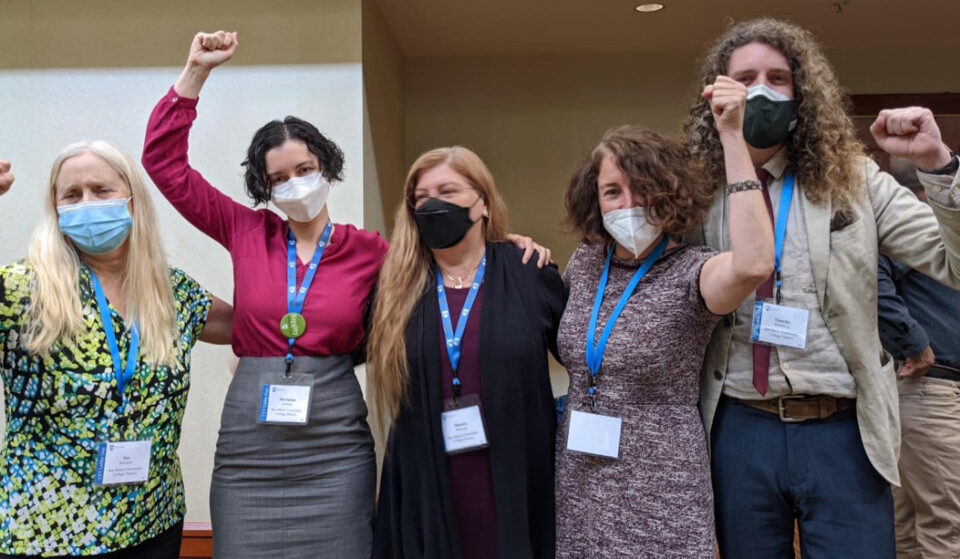 Sue (at left above) joins other AFT 1493 members (l. to r., Marianne Kaletzky, Monica Malamud, Jessica Silver-Sharp and Timothy Rottenberg) at a CFT Lobby Day in Sacramento, during which they met with legislators to advocate for part-time issues–including asking them to support the $200 million for part-time healthcare–which was eventually passed!

According to a report by the American Academy of University Professors, as of Fall 2019, 63% percent of faculty members in higher ed across the country were contingent faculty (adjuncts and/or part-timers), compared to just 37% tenured or on the tenure track. In our District, more than half of faculty are part-timers. Colleges and universities have become so dependent on adjuncts who have unstable, low-paying appointments, and the two-tier system has become so deeply entrenched. Is there really a way out? Are there any good models of institutions that have abolished the two-tier system?

Yes, there is a way out which would require a conversion process towards the Vancouver model.

The union contract at Vancouver Community College (VCC) in Vancouver, British Columbia, managed to transform VCC to a fully pro-rata, one-tier system: only one pay scale, not two, with equal access to benefits and entitlements such as vacation, sick leave, pensions and professional development.  In their career, faculty usually go through only one hiring process at the beginning.  They are mentored and evaluated for usually about two years before they become “regularized”.  “Regular” status is a form of job security similar to tenure. The faculty labor organization exhibited at VCC is commonly referred to as the “Vancouver Model”.

One-tier educational systems are not unheard of in this country.  In fact, we already have a one-tier system.  It is K-12 which has been working well for a very long time.

How did you come to be a community college math teacher? How long have you been at Skyline, and where else have you taught?

I didn’t choose this profession; this profession chose me.  I couldn’t get away from the numbers!  When I was a child, I played school with my little sister, and I was her teacher.  She later grew up and became an engineer, so I guess I did OK with her.  After high school I worked at various service jobs and office jobs as well as at the post office.  At each job, I would somehow find a quantitative aspect to it.

Later I earned a bachelor’s degree at Berkeley in Statistics and a master’s degree in Mathematics at San Francisco State.  A friend of mine got me into tutoring and then I went on to teach at Skyline College.  I’ve been teaching at Skyline as an adjunct over twenty years.

Like many adjuncts, because of the 67% cap on workload, I’ve become a Freeway Flyer.  In addition to teaching at Skyline College, I teach at College of Alameda, and often at Merritt College and Laney College.

What have been your favorite parts of teaching and working at Skyline?

I love working with the students, encouraging them and looking for ways to make the material more accessible to them.  I believe the presentation of material and encouragement are both vitally important in teaching.

At Skyline, I really appreciate the Professional Development benefits which are the best I’ve ever seen in community colleges.  I’ve been able to go to some great conferences, hear some interesting ideas, sharpen my teaching skills, and meet other community college math teachers from all over the US and Canada.  I love getting their different perspectives on mathematics education.Additionally, as an extra bonus my husband also works at Skyline College in the Automotive Department.  It’s great to have someone to talk to about things we encounter at school.

What would you change about Skyline if you could?

Get rid of the two-tier system and go to the Vancouver model!  It would be a perfect way for Skyline to show to faculty, students, and the public its commitment to inclusion and equity.  Skyline could be a beacon for the state and the rest of the country, and the “Skyline model” could become America’s answer to the Canadian “Vancouver model.”  I would love that!

Finally, what is something that most of your colleagues might not know about you?

My father knew Albert Einstein!  My father went to Princeton to get a Ph.D. in Physics and ended up taking classes from Albert Einstein.  My father had a picture of himself attending a lecture given by Einstein.  He always kept it on his desk when he was alive and now, I keep it on my desk!

In the picture below, my father is the one with the black tie pointing to Einstein’s head. 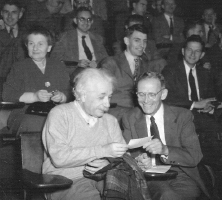 Ed. Note: Not many people know that Albert Einstein was a member of the American Federation of Teachers.  When he joined AFT Local 552 as a charter member in 1938: Einstein stated: