Susan Petit:  “There is life after CSM”

Susan Petit began teaching at CSM in 1968 and was active in the college, district, and state academic senates. When her late husband, John Gill, retired, he volunteered with the Friends of the Palo Alto Library and published on E. E. Cummings.

It’s hard for most people to imagine retirement when they’re still working, but in time most of us will retire, and when we do we have to decide how to re-order our lives. When I retired in 2008 from teaching English and French, I decided to use abilities I already had and develop new ones, to exercise both mind and body, and to meet new people.  Before I explain two of my somewhat unusual activities in those categories, I will say that I also volunteer as a stocker at an East Palo Alto community closet, work out at the local YMCA, continue to publish reviews of and articles about contemporary fiction (the novelist Marilynne Robinson is my current interest), and travel yearly to London to see plays. I may have ignored the good advice I got upon retiring not to commit myself to too many things.
[photo below: Susan Petit speaking against budget cuts at CSM in 2010] 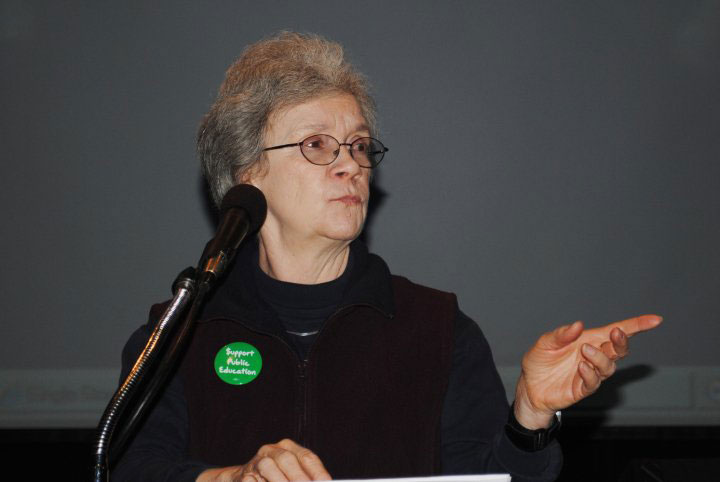 Since retiring I have taken on a new kind of writing that connects me with the community: I produce program copy for the Pear Theatre in Mountain View. This innovative professional theater founded in 2002 and located near Shoreline Amphitheatre has just moved to a slightly larger but still intimate space where its dedicated leadership brings a vibrant theatrical experience to the Peninsula on a tiny budget. In each of the more than forty short essays I have written so far for the Pear programs I have tried to include useful information and thought-provoking ideas about the play and its author. These essays vary widely, as the Pear stages plays from a broad range of genres and periods. For example, its next production, Shaw’s Major Barbara, will be followed by a romp about zombies and computer nerds written by a local playwright.

Because of this variety, to write my copy I have had to research playwrights including Shakespeare, Corneille, Chekhov, Maugham, O’Neill, and Williams as well as contemporary dramatists including Tom Stoppard, Lynne Nottage, Sam Shepard, Harold Pinter, Katori Hall, and Tracy Letts. Doing this research is like taking a short course in the playwright and the play. I like that, but the best payoff is seeing audience members reading what I’ve written. In contrast to the profound silence that follows publication in an academic journal, the rustling of program pages and a look around the auditorium tells me that I’ve found a readership. Also, I believe that I’m contributing to the cultural life of my community, albeit in a small way. This kind of community service uses academic skills and provides me with brain exercise.
[photo below: Susan Petit circa late 70’s, early 80’s (photo from the PHLIP project, CSM Library)] 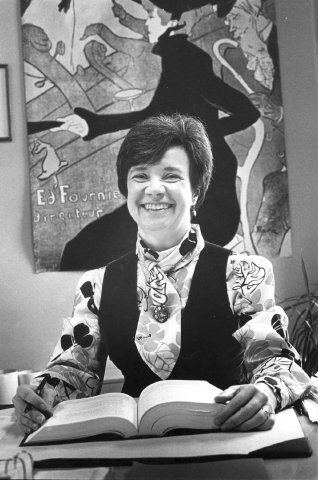 The new retirement activity I chose in order to develop new skills and get physical exercise is line dancing. This may conjure visions of people in boots and cowboy hats, but line dancing has evolved since the 1990s. You can see the current styles on Line Dance Dallas’s YouTube videos, where graceful young women—most of them seem to be Chinese and Chinese American—demonstrate a huge variety of dances. Each has its own unique sequence of steps, so dances have to be learned individually, and the styles include salsa, cha cha, waltz, Charleston, two-step, foxtrot, hip hop, hustle, tango, and polka. What an exercise of mind and body! And how good it feels to dance after working at a keyboard. Besides taking lessons, I go to local dances, where I have a new social experience that involves moving in synchrony with perhaps 40 or more other people. It may not be community service, but it is communal activity.

Retiring means, or should mean, finding activities that help oneself and others and, preferably, that bring one into some type of community. My mix does that well for me, and I wish the same for every retiree and future retiree. As a former colleague told me, “There is life after CSM.”