Organize. Resist: Is the Glass Half-Empty or Half-Full?

The 75th annual Convention of the California Federation of Teachers was held from Friday, March 31 through Sunday, April 2, at Sheraton Grand Hotel in Sacramento. The Convention was attended by 435 registered delegates, and many other guests and speakers. The delegates included community college instructors, K-12 teachers, early childhood educators, classified employees, and UC librarians and lecturers from all over California.  The AFT Local 1493 delegates were Monica Malamud, Teeka James, Joaquin Rivera, Nina Floro, Anne Stafford, Dan Kaplan, and Katharine Harer. -Ed.

Along with six other delegates from AFT 1493, I spent the first weekend of this year’s Spring Break at the Sheraton Grand Hotel in downtown Sacramento, attending my first ever California Federation of Teachers Convention. Teeka James and I left CSM following our final classes of the day on Friday, March 31, battling the traffic across the San Mateo Bridge and Interstate 80 to arrive just in time to get a bite to eat at the Union Social from 6:00 – 7:00 before attending the Community College Council meeting from 7:00 – 10:00. 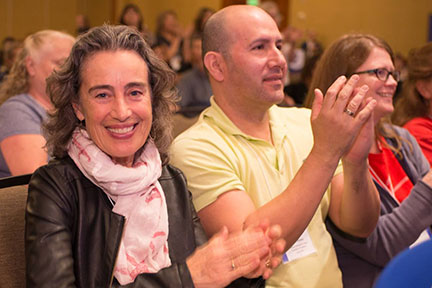 When Dan Kaplan leaned over in his chair at the Council meeting and whispered that he would like me to write an article for The Advocate about the Convention, I said, “sure” (OK, not initially), thinking I would write about what it was like to see the wheels of the CFT in motion and about how the Convention inspired me. I did see the wheels in motion – sometimes tedious, sometimes fascinating – and I was inspired. But in the end, I left the conference feeling somewhat disheartened and demoralized. I confess that I am something of a pessimist, but I was not alone in feeling a sense of dread about the threats to education in the U. S. and to our students.

The convention started at 9:00 a.m. Friday morning, but since I decided not to cancel any classes that day, my introduction was that evening’s Community College Council meeting. Richard Winn, the interim President of ACCJC, was first on the agenda. Delegates were told that Mr. Winn would stay as long as we wanted to ask questions and offer comments – in the end the majority of the three-hour time block was given over to an extensive exchange about the future of ACCJC. Much of what Winn said was encouraging: he “hoped” to take the fear and mystery out of the accreditation process; visiting teams will be smaller and will include more faculty; accreditation will be based primarily on student learning and institutional stability; sanctions will be levied less often; self-studies will be shorter; and given the lack of definitive evidence that Student Learning Outcomes actually improve student learning, ACCJC will not be emphasizing them in the future. He acknowledged that trust and mutual respect had been strained by the accreditation debacle at CCSF. Mr. Winn was not, however, willing to offer an apology to CCSF, nor was he willing to discuss past actions by ACCJC. And rumor has it that at its 2017 Partners in Excellence Conference, which began just four days after the CFT Convention ended, ACCJC backed away, to at least some degree, from Winn’s rejection of SLOs as an appropriate area of focus. (This, by the way, was the same conference which featured a panel discussion entitled, “Do Educators Have a Prima Donna Complex?”)

Immigrant rights: How to respond to ICE

Immigrant rights and strategies for supporting our immigrant students were the topic of two workshops, a panel discussion, a march, and a rally on the Capitol steps. Katharine Harer and Nina Floro attended an informative and compelling workshop on “Immigrant Worker Rights and Defense,” presented by the Associate Director of AFT Human Rights & Community Relations, the Chief of Staff for the California Labor Federation, and an ACLU immigration Lawyer. The workshop addressed the accelerated threats against immigrant workers since Trump’s election. In the months since Trump assumed office, arrests of immigrants – both documented and undocumented – have increased by more than one third even though many of these individuals have committed no crime. The panel participants offered the following advice:

Before opening the door to ICE agents, ask them to pass a warrant under the door; to be valid, the warrant must include the person’s name – spelled correctly- and the exact address, in addition to the signature of a judge or magistrate. Agents often present invalid warrants when visiting homes or workplaces on “fishing expeditions.” If the warrant is valid, step outside so that no one inside is endangered. When face-to-face with an ICE agent, it is best to say nothing other than, “I plead the 5th Amendment and choose to remain silent.” Do not sign anything without first speaking to a lawyer. Report a raid immediately to the United We Dream Hotline: 844-363-1423. Take pictures, video, and notes and write down badge numbers.

I am personally grateful for these suggestions, and will pass them along to students. In the meantime, the attacks on undocumented immigrants, including those in our classrooms, continue. Most of us know about the story of Daniela Vargas, who was pulled over and arrested by ICE agents immediately after speaking about recent ICE raids at a news conference, and just four months after her DACA status expired. And in recent weeks, we have heard numerous stories of ICE picking up undocumented immigrants, including victims of domestic violence, at courthouses.

State of the Union: Successes & many threats

In his State of the Union address, CFT President Josh Pechthalt listed a number of 2016 successes for the state of education:

Despite these wins, however, Pechthalt began and ended his State of the Union address with an equally long list of looming threats to public education, reproductive rights, labor unions, voting rights, and health care (witness the House vote to dismantle the Affordable Care Act on May 4). He specifically predicted the loss of agency fee payments and possibly automatic payroll deductions and even collective bargaining. Though labor unions dodged a bullet last year when the Supreme Court let stand a lower court ruling in the Friedrichs case, maintaining the right of unions to continue to collect agency fee payments, a similar challenge (Janus v. AFSCME) is making its way to the Supreme Court now. CFT Executive Director Joe Boyd went so far as to predict that some unions simply will not be able to withstand the hit to their budgets if the new Supreme Court agrees that collection of agency fee payments violates the First Amendment.

If we are to overcome the undercurrent of despair that surfaced during and after the Convention, if we are truly going to remain the strong and stalwart supporters of all of California’s students, we must ORGANIZE and RESIST like never before.