On Friday, January 22, 2021, during the first week of the new term, the City College of San Francisco (CCSF) interim chancellor issued a statement that all full-time tenured faculty would soon be receiving a lay-off notice.  How could such an action be happening?

An answer may start with the rogue Accrediting Commission on Community and Junior Colleges which harshly sanctioned CCSF in 2012. A year later, it threatened the college with closure. Since then, CCSF has been severely downsized and transformed to be run more like a business in which a greater emphasis by those with power is placed on the number of bodies in a class rather than on whether learning is taking place.  Despite winning its full accreditation in January 2017, and a free tuition program for residents of San Francisco, jobs and enrollment have continued to decline, as shown by the state Chancellor’s data mart:

For years, the college community has been told there is a budget crisis. The administration has claimed it can be “solved” by eliminating classes, and that, somehow, miraculously, enrollment will increase.

That has not happened, especially since the administration has done a poor job of encouraging students to enroll, resulting in low-enrolled classes followed by more cuts. And, a few months after one cut, the college community will be informed of another budget crisis requiring still more cuts. Last year, some 300 classes for the spring 2020 term were cut. For the 2020-21 school year, before the pandemic, the administration decided to cut 800 more classes and eliminate the jobs of some 250 part-time faculty. For the 2021-2022 school year, they currently intend to cut 600 more classes.

Why is this happening? Don’t administrators seek growth?

There appears to be a change in which the “success” of administrators is measured not by growth, but by how capable they are at imposing austerity.

For CCSF, one needs to also take into consideration that most of its students are working class and lower middle-class people of color whose educational needs and interests have, despite lip service to the contrary, been historically disregarded.

Essentially, CCSF is undergoing a transformation from being a community college that serves the needs and interests of a diverse student body to one that is a job training center, or a college that students attend simply to complete requirements to be eligible to transfer to a four-year school. 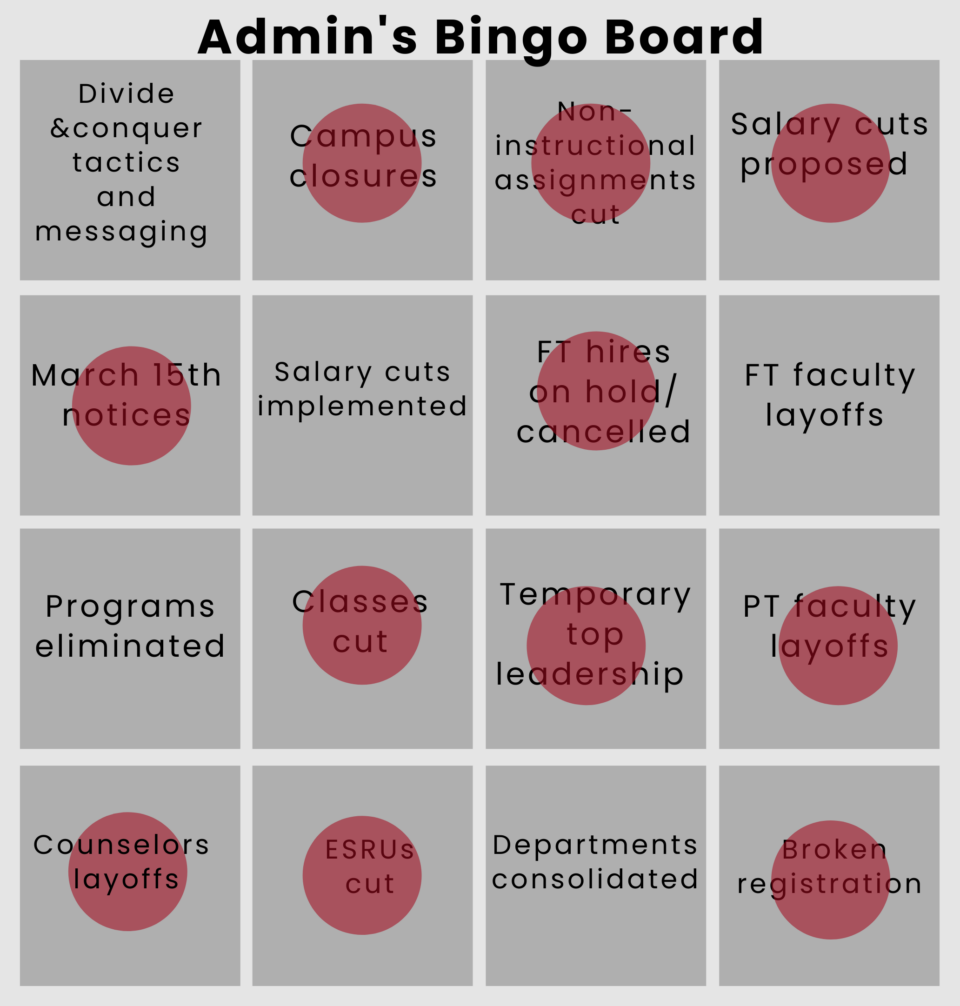 These changes have resulted in the degradation of the college’s faculty.  A blast sent out by the faculty union, AFT  2121, describes one result of the chancellor’s lay-off message to tenured faculty:

“A March 15th notice (a.k.a. pink slip) is…a statement that you could be laid off in the Fall. It puts full-time faculty in the same position for Fall 2021 that part-time faculty are in every semester: We’re employed if there’s work available, but the District is not obligated to create work for us.”

The Higher Education Action Team (HEAT), a community organization that was formed out of a meeting of part-time faculty in the Fall of 2019, has been fighting against the further dismantling of student educational opportunities at CCSF. Its members have organized protests, spoken out at meetings, and have fought for emergency funding from the city to restore classes cut for the spring 2020 term. That measure was passed by a 7 to 4 vote of the SF Board of Supervisors, but was successfully vetoed by Mayor Breed.

HEAT is now seeking widespread support for a petition that describes some of the destructive actions of CCSF’s administration, and calls for an expression of no confidence in their leadership.  If you are concerned about the integrity of CCSF and want more information about what has been happening to it, read and sign the petition here.

HEAT can be contacted at: sfcitycollegeheat@gmail.com

Rick Baum is a member of AFT 2121 and has taught part-time at CCSF for over twenty years. He has published articles in Counterpunch, Monthly Review, New Politics and the journal of the California Part Time Faculty Association (CPFA)