Rod Daus-Magbual: Working for social justice in the classroom and community

“Faculty Focus” is an occasional Advocate feature that highlights the unique work and accomplishments of our members. 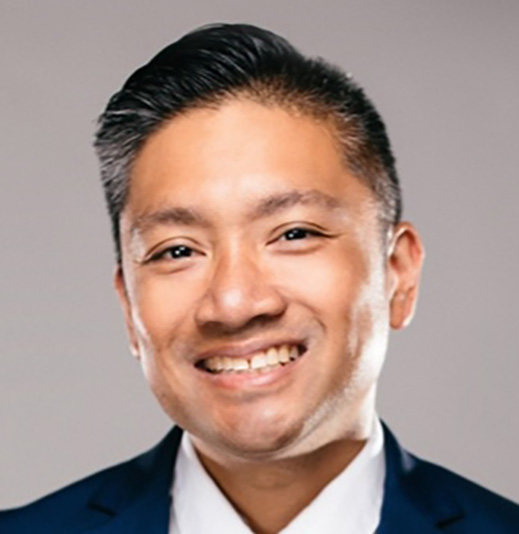 Dr. Rod Daus-Magbual began teaching Filipino Studies in the Kababayan program at Skyline College in the Fall of 2004 and very quickly decided “This is where I want to be!” He had met Kababayan Program Coordinator, Liza Erpelo, at a Filipino-American education conference shortly before he started teaching his first Skyline classes and, as he continued to teach in the program, he and Liza worked together to build the Kababayan program. Before he started at Skyline, Rod was Director of Curriculum and Program at Pin@y Educational Partnerships (PEP), a service-learning program in which graduate and undergraduate students from San Francisco State (SFSU) and surrounding universities receive an opportunity to teach critical Filipina/x/o American studies and develop skills in the practice of culturally relevant & responsive pedagogy, lesson planning and teaching. PEP’s pedagogical orientation aligned well with the Kababayan program’s instructional focus on the Filipina/x/o and Filipina/x/o American cultural experience.

Building a Skyline to PEP to grad school “pipeline” 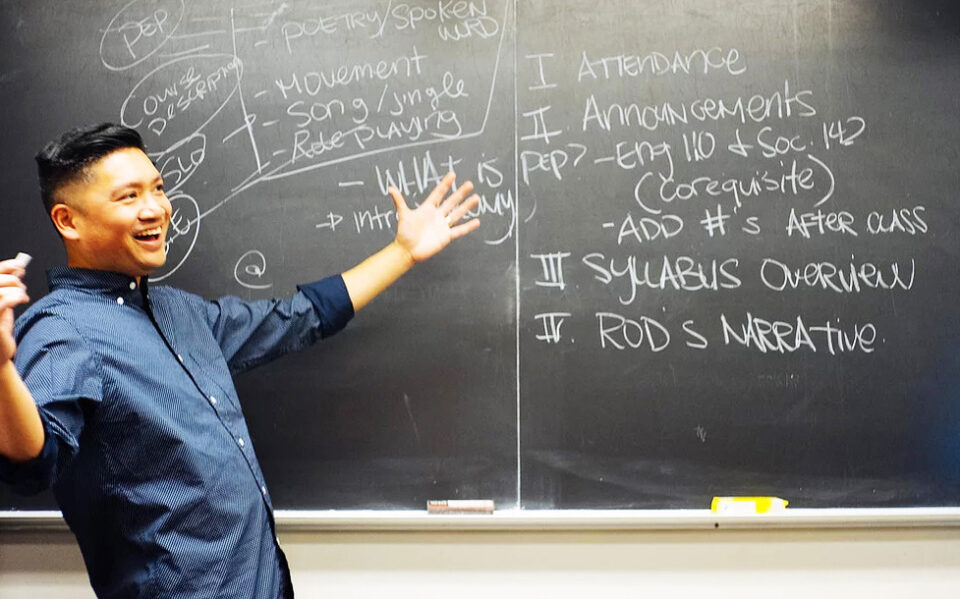 where he became Executive Director in 2018. With his PEP connections, Rod started recruiting Skyline students who were transferring to SFSU into the PEP program and, as he put it, “a really cool pipeline was happening.” Students would go through the Kababayan program at Skyline, then transfer to SFSU and teach in the PEP program, and then some would go to graduate school in Ethnic Studies or Counseling or other related programs. Some have even come back to work at Skyline.

Growing up in SoCal

Rod’s parents were part of the generation of the post 1965 Filipino immigration to the U.S. and he grew up in Southern California, first in Long Beach, which had a large Filipino community, and then Riverside for his middle and high school years, where he was one of the only Asian kids in a class of predominantly white students.  A lot of his political perspectives developed during that time as he experienced anti-Asian racism, listened to the hip-hop music of the time and watched the police beating of Rodney King, the acquittal of the four officers involved and the ensuing L.A. riots. He personally encountered harassment by police and other authorities and saw friends and relatives assaulted and incarcerated. At the same time, during high school Rod became part of a UC Riverside student outreach program called Asian Pacific Student Programs. In that program he started to learn about Filipino American history by reading books like Carlos Bulosan’s America Is in the Heart, and he began working in coalitions with other students of color organizations, in particular to campaign against the anti-immigrant Proposition 187.

Rod went on to UC Riverside for his undergraduate education, where he continued working with Filipino student organizations and was very politically active. After graduating in 2000, he worked with youth of color and first-generation college students in student support services such as an Upward Bound program. He and his wife, Arlene Daus-Magbual, then both decided to get their Masters in Asian American Studies at SF State and they moved to Daly City. At SFSU, Rod met Dr. Allyson Tintiangco-Cubales, the founder of Pin@y Educational Partnerships, who recruited him to work in the PEP program while he completed his MA. In PEP, Rod learned to write curriculum, develop pedagogy and taught and mentored large numbers of working-class Filipino American high school students. That experience was a perfect preparation for him to become a teacher in the Kababayan program at Skyline.

From the classroom to Daly City politics

As Rod taught at Skyline and continued working with PEP, he saw many students struggling to afford to live and survive in the area as their families were forced to move to places like Stockton or Tracy or Sacramento, and he also heard the hardships of many undocumented students. Then, following the outcome of the 2016 Presidential election, he began to think: “Everything that I’m about, I’ve got to take what I’m doing in my classroom, and take it outside these four walls, and change the narrative.” That’s when he decided to get involved in Daly City politics. He’d completed an Ed.D. program in organizational leadership with a minor in international multicultural education in 2010 and he was encouraged by longtime Daly City councilmember and PEP Board member, Ray Buenaventura, to become a member of the Daly City Library Commission and the city Planning Commission. 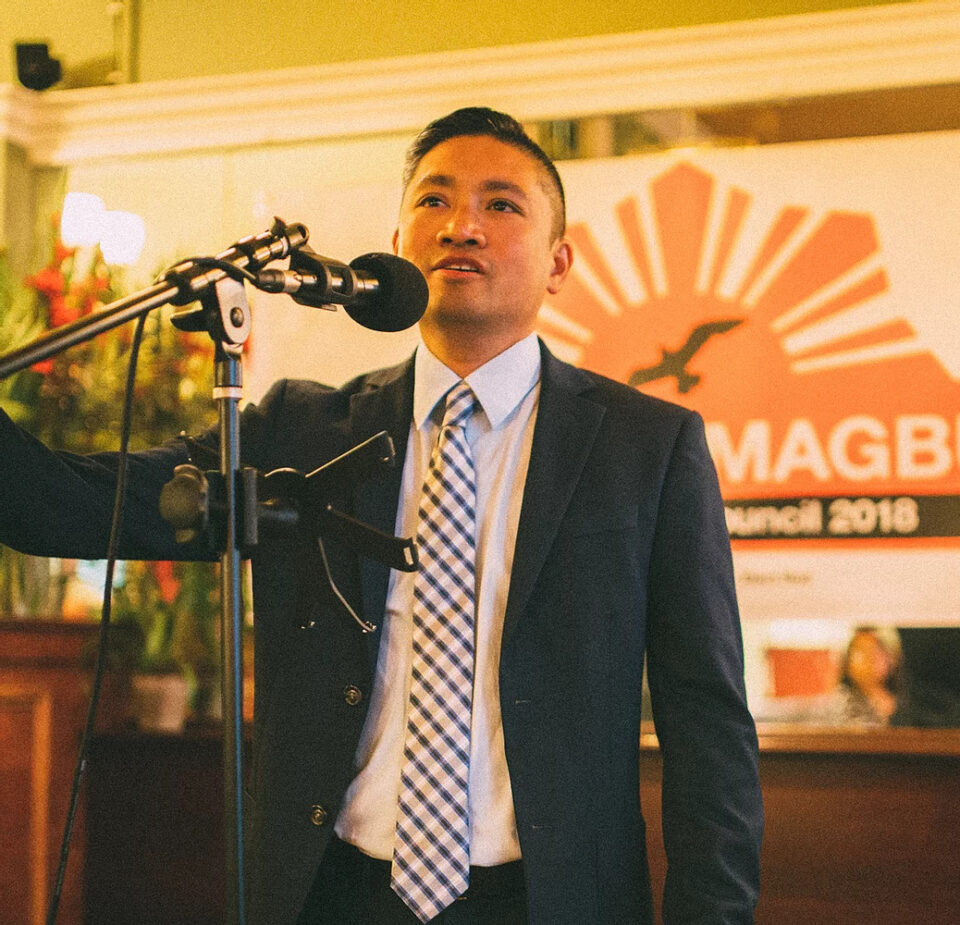 18, Rod successfully ran for City Council, and many of his former students were part of his campaign. One central focus of Rod’s campaign was engaging communities of color, especially the FilAm community, to get them to vote despite their large population and low voter turnout. He thought: “If we’re trying to maintain communities of color that have been here for 20 plus years, what are we doing to keep them here?” He wanted to “find ways to provide more services for people that are having a hard time with rent, more affordable housing and teacher and staff housing.”

Since joining the Council, Rod is proud to have helped pass affordable housing developments such as teacher and staff housing for Jefferson Elementary School District and Jefferson Unified High School District. Rod has also worked to develop more culturally responsive programs in Daly City, especially those reflecting the Filipino community.  He has worked with the Filipino Mental Health Initiative to help them secure a multi-million dollar state grant to establish a Filipino youth center.

Along with these successes, Rod has occasionally felt his leadership position has come into conflict with his personal values and he hasn’t decided whether he will run for City Council again in 2022. He explained that “I share a lot of progressive and radical beliefs with a lot of my constituents, and some people will look at me and say that ‘You teach ethnic studies, but you’re not about it’… And those are the things that kind of hurt.” But then he reflected on the positives of what he’s been able to do: “I feel like we’ve been able to actually change the discourse on City Council, that we can actually now talk about race. That means it’s okay to talk about culture, that we can talk about police. We can talk about affordable housing that’s actually getting projects in the pipeline and money invested and shovels in the ground, that it’s happening.”

Connecting his political work back to his work with his students, Rod commented that “It’s really cool to see students not only learn about the struggle and survival stories of their people, understanding that that traumatic history was part of their history, but also to be part of and taking part politically in organizations that are doing work to address that generational trauma. That’s really fantastic.”

Teaching as an adjunct at Skyline

When asked about his experiences working as an adjunct at Skyline College, Rod reflected, “I’m not gonna lie, being an adjunct for this long has definitely been tough, but then I also appreciate those [in the union] who are fighting for me when I can’t be present.” Despite the difficulties of working as an adjunct faculty member, Rod expressed very positive feelings about teaching at Skyline: “At Skyline, I feel appreciated, I feel loved. I feel like I’m in a community… I’ve felt this sense of connection to Skyline more than I have in other institutions… There’s something at Skyline that has kept me here. And it’s those relationships that I have with… all these people that I’ve kind of grown up with.”

That Skyline community hopes that Dr. Rod Daus-Magbual will continue as a Skyline faculty member as well as continue his advocacy efforts in the larger community for many years to come.