As Cañada and Skyline Colleges marked their 50th anniversaries this year and last with celebrations of history, defining actions by students and faculty that shaped these college’s first years were largely omitted from the narrative. Drawing from archival materials in Cañada College Library, this article in two parts looks back to May of 1970, days after President Nixon authorized the US invasion of Cambodia, when a very different type of crisis kept our students out of class.

Following the tragic shooting of unarmed college students at Kent State’s anti-Vietnam war protest (May 4, 1970), hundreds of universities, colleges, and high schools closed throughout the US, as approximately 4 million students went on strike. If you’re not familiar, Kent State had a major impact on public opinion on the role of the US in the Vietnam War.  In California, then Governor Reagan ordered California State and UC campuses to conclude classes May 6 and remain closed through May 10 (New York Times). For California’s community and private colleges, this was an “ask,” not an order.

On May 7 and 8, Cañada was winding down its second year as a college. With classes canceled by the Chancellor, Cañada students gathered and voted to keep the campus open and go on strike for the rest of the semester. CSM, Skyline, Foothill and De Anza also voted to stay open, however CSM and Skyline did not hold campus-wide strikes. [A student antiwar protest online map by the U. of Washington shows details of student strikes nationwide, including Cañada (“on strike”)].

For the next two and a half weeks, Cañada students and faculty jumped into high gear, forming ad hoc committees and rapidly organizing a two-day campus symposium for May 7 and 8. (“The Junior College Scene: Anti-War Activity on the Peninsula”, S.F. Chronicle). The Cañada faculty AFT chapter was involved with organizing speakers for the symposium workshops. 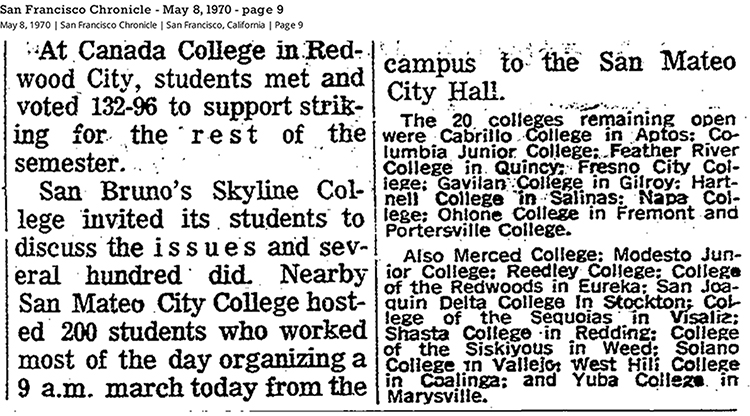 On May 9, student representatives from all three colleges traveled to San Jose State where students from all over the Bay formed a broader coalition called the California Student Offensive. Cañada classes resumed May 12 and 13 only, “to allow students and instructors to work out the means for making up class time and work…during the recent crisis or in coming weeks,” however, the workshops did not stop: 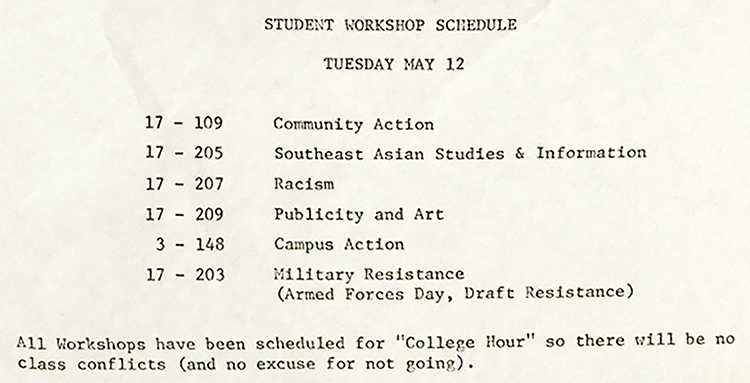 Also on May 12, the District’s “Chancellor-Superintendent” Clifford Erickson informed the SMCCCD Board of Trustees of the “consequences” for faculty and students on strike:
“The college presidents have declared the right of teachers and students to follow their individual conscience with respect to class teaching and class attendance, with the understanding that teachers will not be paid for sessions they do not conduct and students will be graded in accord with normal academic standards…”

The colleges of this District are…allowing each according to his conscience to withdraw, if he must, from the classroom, with the usual consequences for those who do not meet academic and institutional standards. Message from Chancellor to Faculty and Staff  (24779, pp. 35-36) 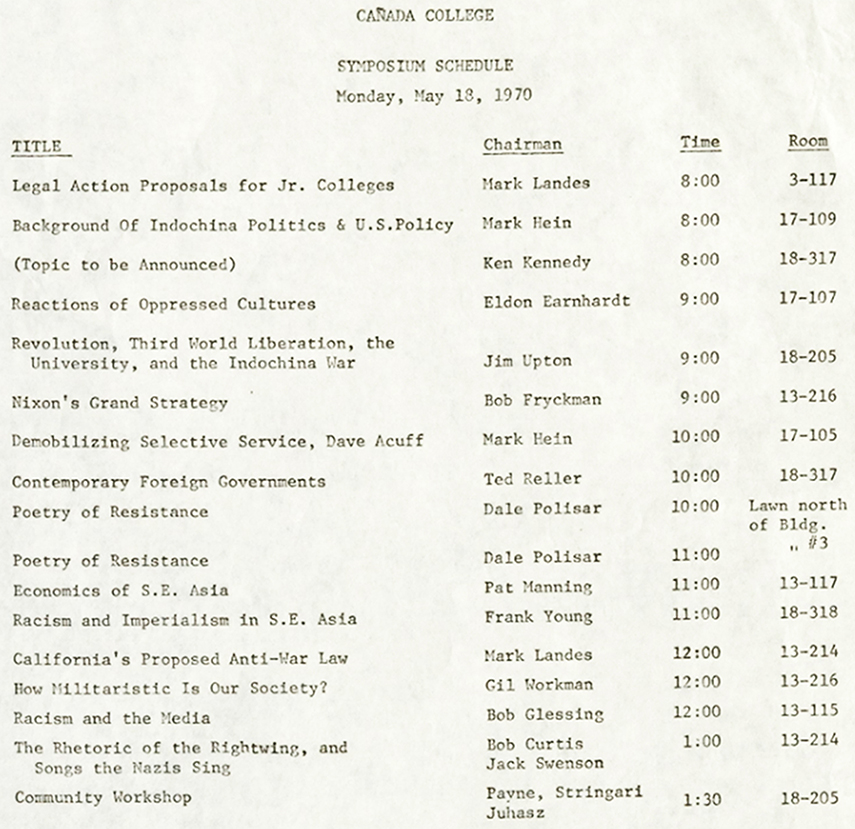 On May 21 and May 22, scheduled symposium activities were suspended at the request of the “Cañada Minorities against Racism” in favor of workshops on that topic:

A May 22 Memorial March by Cañada students and faculty to the Redwood City Courthouse was held in memory of the six black students killed at Jackson State on May 12.

Also beginning May 21, Cañada’s Drama department staged Heinrich Ibsens’ An Enemy of the People (in reference to Nixon), with tickets starting at .50c. The strike symposium resumed May 25 with its end date unconfirmed by my sources.

The dramatic events of May during Cañada’s second year reflected unprecedented community building, political activism and collaboration among faculty and students that coalesced quickly and successfully. The strike symposium both mirrored and shaped the emerging culture of the new college. We’re fortunate to have a small collection of archival sources in the Cañada College Library that document this. The 1970 student strike deserves a prominent place in Cañada’s historical narrative. Can we know who we are as a college without knowing who we were?
Please look for Part 2 of this article — featuring actions by CSM & Skyline — in the Advocate’s September 2020 issue. Hopefully by then, the college archives will reopen. I welcome your corrections, comments and additional sources!