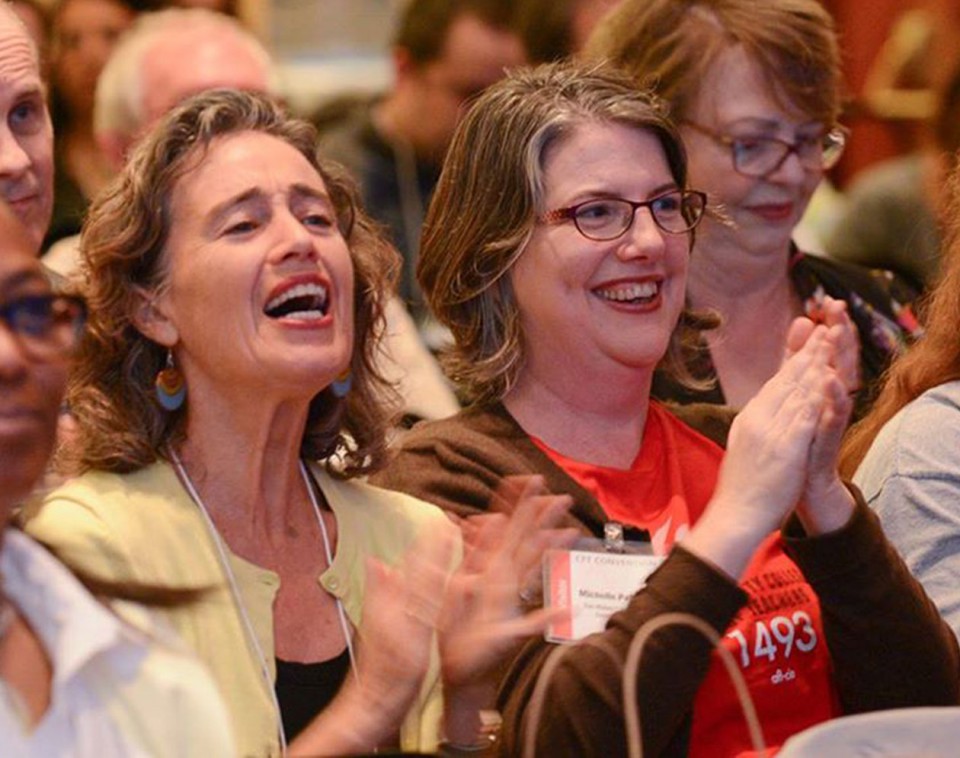 This annual gathering of faculty and staff from pre-K, K-12, community colleges, universities and adult schools throughout California is always a huge shot in the arm of inspiration and information, but this year a dark cloud loomed over our heads.  Despite the positive reports of new charter schools and colleges joining CFT, Prop 30 helping to promote healthier budgets and more FT hires, and the successful staving off of the closure of City College of San Francisco — public education and teachers’ unions, more than ever before, are under serious attack.

Right-wing attacks on union rights
During Saturday’s General Session, Dan Martin, CFT Executive Director, enumerated the challenges:  1) The Vergara lawsuit, that would eliminate tenure rights and due process, won the first round in January and is in the appeal process; 2) The ACCJC is still in control of accreditation in California; 3) The UC system is threatening to increase tuition – again; and 4) the most frightening specter of all:  Friedrichs v CTA, a case that’s going to the Supreme Court in the next few months that would eliminate agency fee.

What is agency fee and why do we need it?
Teachers’ unions must legally represent all faculty members; for example, any faculty member who has a serious issue that impacts their working conditions that cannot be resolved, even with the union’s intervention, may have a grievance.  A grievance may ultimately go to an arbitration hearing where the union’s legal team will defend this faculty member and legal costs can sometimes require exorbitant amounts of money.  And what if there are many cases that require legal defense?  The union’s coffers could be drawn down to nothing, and if that happens, the union wouldn’t be able to afford to hire staff, maintain an office, or carry out the essential services that support faculty on a day-to-day basis. However, when we have agency fee, all faculty members are either dues paying members or agency fee payers, so that the union has sufficient funds in its budget for daily operations plus any legal contingencies that might, and do, occur.

Who wants to remove agency fee?
Remember Wisconsin and Governor Scott Walker’s successful take-away of collective bargaining rights?  How did Walker pull that off in a state with a deep labor history?  With a lot of money from a group of wealthy right-wing donors, such as the Koch brothers, who are targeting public education and taking the privatization of our public schools “to the bank”.  According to Martin, fifteen states have passed laws against collective bargaining, and if the CTA loses the Friedrichs case, it will influence all public sector unions, not just teachers.  The CFT has initiated a campaign, “Building Power”, to ensure that if, or when, the decision in this case goes against labor, teachers’ unions will survive.  The three points of the campaign are:  turn our fee payers into members; educate everyone about the importance of union membership; strengthen our organizations to withstand the attack.

Next target of right-wing: collective bargaining
And that’s not all.  Following in the footsteps of Friedrichs v CTA — which everyone who seems to be in the know is certain will go against the union — another legal case is in the wings and headed to the Supreme Court.  This one would take away — take a deep breath — collective bargaining rights:  the right of workers to negotiate a contract that protects our working conditions.  Jeff Freitas, CFT Secretary Treasurer, made his report next and continued to point at the dark cloud over our heads.  Freitas, who is normally a mild-mannered guy, said:  “If Friedrichs v CTA wins, the CFT could lose $2 million dollars from our annual budget.  We could disappear”

State of the Union
Next up was Josh Pechthalt with his annual State of the Union address.  Josh gave us the good news first:  we elected Betty Yee, the first Asian and a staunch progressive and advocate for public education, as State Controller; we passed Proposition 47; and because of our collective effort to pass Proposition 30, it has continued to provide more resources for schools.

Then the bad news: our K-12 schools are turning into “testing factories”; California, the 8th largest economy in the world, still ranks near the bottom in the nation in per-pupil spending; and we are, “likely to get rulings from the Supreme Court that could destroy union membership and collective bargaining.”

Defending education from attacks
According to Pechthalt: “The Right is using fear and propaganda to attack labor – in Illinois, Michigan, Wisconsin – states where the labor movement was born.”  He paraphrased conservative pundit, Grover Norquist who stated: we need to shrink government to a size we can drown in a bathtub.  The CFT is working, on a number of fronts, to defend public education and strengthen our ability to weather these attacks.  One front Pechthalt described is a new, “impressive labor and community coalition to reform Proposition 13”, with the goal of putting an initiative on the ballot in 2016 to tax corporations and businesses at current rates.  He cited Disneyland as an example of a huge offender, paying property taxes at mid 1970’s rates.  The reform of Prop. 13 could bring in $9 billion a year to education, and when combined with Prop. 30, a total of $15 billion for schools each year.

Pechthalt told us about some of the other campaigns in which the CFT is engaged: to divest STRS, the teachers’ pension system, from investments with gun-makers; to unionize the over 200 charter schools in Los Angeles; to reform the ACCJC and, in specific, restore the democratically elected Board of Trustees to CCSF and carry out an impartial evaluation of the college by a non-ACCJC review team; and to continue to fight for the multi-faceted purpose of community colleges – “for workers, seniors and returning students, providing affordable classes for transfer even if it takes more than two years to do so.”

Key-note inspiration
Finally — the super-dose of inspiration, the shot of espresso, the leap into the mountain lake:  Jeff Duncan-Andrade, (in photo below) professor of Raza Studies and Education at San Francisco 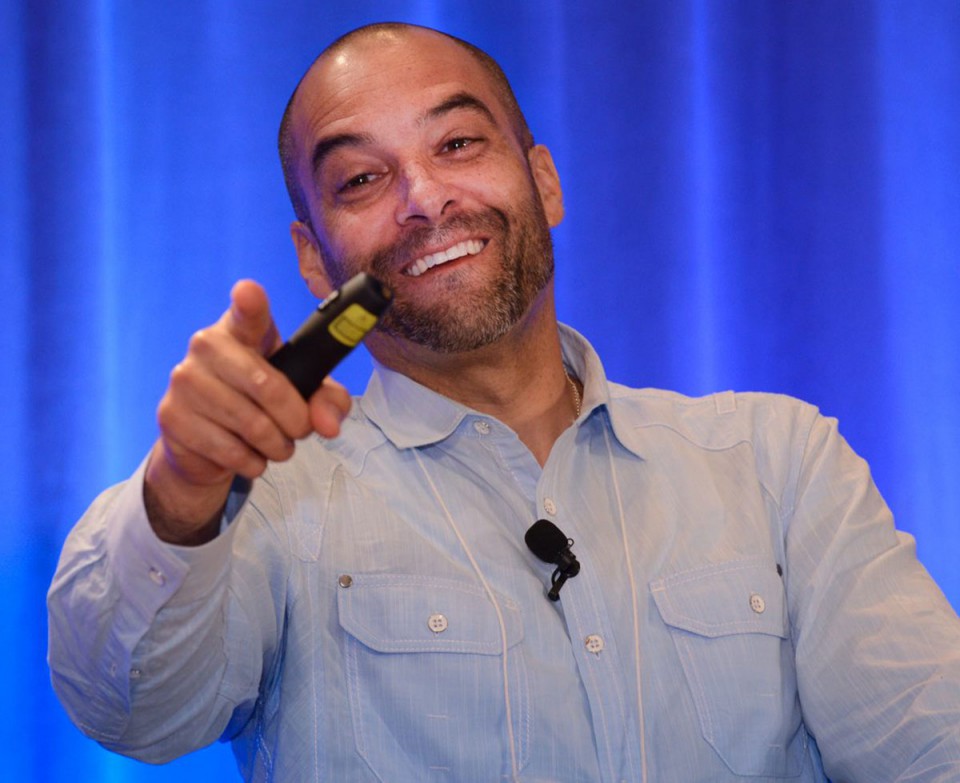 State University and a classroom teacher in East Oakland, followed with the Keynote Address. He focused his talk on the “unrelenting toxic stress” of gun violence and hopelessness that gives our young people a form of PTSD.  He asked the question:  “What is happening to young people before they stand in front of us in our classrooms?”

Duncan-Andrade used a metaphor he borrowed from poet/songwriter, Tupak Shakur:  “We must invest in roses that come from concrete.”  And he handed us a rose, of sorts, when he stated:  “The single biggest potential factor in a young person’s life is a caring adult.”  We all stood up because we knew what he was saying was true.  That’s why we’re in education.  Teachers, school nurses, secretaries, custodians, librarians – we all stood up.  That’s why we were in that room and why we will continue to work for the good of our students no matter how dark the clouds.