Social Justice in the Community 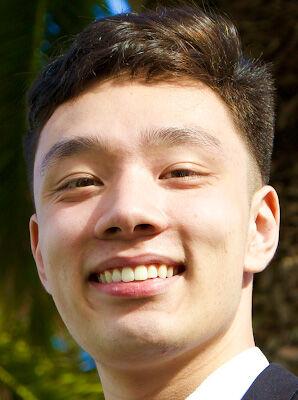 James Coleman (in photo at left) made history in 2020 when he was elected the youngest-ever South San Francisco City Councilmember at the age of 21, as well as South City’s first openly LGBTQ+ councilmember. A lifelong resident of South San Francisco and an alumnus of South San Francisco High School, James was considered a definite underdog when he launched his bid to unseat 18-year incumbent Rich Garbarino. He won the election through a grassroots campaign that mobilized over a hundred volunteers and developed innovative methods of reaching voters in response to the pandemic.

Since taking office in December 2021, James has been a stalwart, outspoken, and highly effective ally to labor groups around the County–including AFT 1493. James spoke at our January press conference in support of AFT’s demands to keep our communities safe amidst the omicron surge: together with AFT, he advocated for KN-95 masks for students, air purifiers for faculty, on-demand Covid testing, and a remote working and learning option for the duration of the surge. James has also attended picket lines in support of workers from numerous other unions, from grocery workers to delivery drivers to nurses.

James is now running for California Assembly to represent Assembly District 21, which covers San Mateo County east of 280, stretching from South San Francisco to East Palo Alto. As Assemblymember, he hopes to implement a diverse set of progressive reforms, including Medicare for All in California, free community college for the entire state, and truly affordable housing. If elected, James would be the youngest-ever Assemblymember in California history. He is proudly running a corporate-free campaign, meaning that he is not accepting donations from fossil fuel companies, corporations, or private developers. We sat down with James to talk about what’s motivated him to run for Assembly and what advice he has for newcomers to politics who hope to get involved in civic life.

[Advocate:] I know you grew up in South San Francisco. Tell us a little bit about yourself and what your life was like up to the point you decided to run for City Council.
[James Coleman:] I was raised in a working-class family. My father was a FedEx worker, and my mother is a Taiwanese immigrant who works as a lab assistant at Kaiser. When I was 5, my father suffered a traumatic injury that left him paralyzed from the waist down, and my mother had to work two jobs to make ends meet. At a young age, I experienced what it was like to fall through the cracks and wanted to study biology to learn how people could heal, and study government to learn how we could make our government and our medical system work for everyone and not just the wealthy few.

And that run for City Council? What prompted you to do it?
After I was evacuated off of my college campus due to COVID, I returned back to my hometown of South San Francisco. We all saw how COVID wreaked havoc on our working families in healthcare, housing, education, and our childcare systems. And we saw how the public health crisis of systemic racism was not just a distant injustice, but a real and present issue in our home community with the killings of Derrick Gaines, Chinedu Okobi, and Errol Chang. So I ran for City Council to bring about the change and justice that I wanted to see in our own community.

You won your City Council seat against what seemed like impossible odds, beating 18-year incumbent Rich Garbarino, who was also the mayor of South San Francisco. How did you and your team pull that off?
Many people didn’t believe we could win, but we ran a grassroots, people-powered campaign with a platform of change. Together, our team of over a hundred volunteers dropped flyers at people’s doors, made tens of thousands of phone calls, sent thousands of emails, and messaged hundreds of their neighbors online. In our many conversations with voters, we found that the people like bold ideas and recognize that the status quo isn’t working for the majority of our working families.

What have been some of your proudest accomplishments and moments during your time on SSF City Council?
Passing a $5 Hazard Pay ordinance for our essential grocery store workers in the middle of the pandemic and passing a guaranteed income pilot program providing $500 per month for 12 months to 160 families in need. I’ve also been working hard to build mixed-income social housing in South City to truly treat housing as a human right and maximize the community benefits of the housing that is built, and our council recently gave unanimous direction to place an Article 34 measure on the ballot for November (to allow our city to build city-owned affordable housing). Something that I am also extremely excited about is a ballot measure I’ve been organizing for that would tax the largest corporations in the city to provide universal preschool and childcare for every South City family, and significantly raise the wages of our childcare teachers.

Why did you decide to run for California Assembly?
I decided to run with a clear purpose—to make sure that Sacramento works for everyone, not just the wealthy and well-connected. We have a supermajority of Democrats in the state legislature, and yet California has trouble even bringing AB1400 (single-payer healthcare) and AB854 (reform of the Ellis Act to protect against unjust evictions) down to a floor vote. It’s way past time we put the interests of working people over that of private profit.

Why should SMCCCD faculty who live in Assembly District 21 vote for you?
I’m the only corporate-free candidate running in this race, and am proud to be running on a platform to uplift all of our working families. That means a wealth tax on the biggest billionaires and corporations, guaranteeing healthcare as a human right, aggressive action on climate change and holding PG&E accountable, building mixed-income social housing and affordable housing throughout California, and fully funding our public education system from universal childcare to tuition-free community college. I would be honored to have your vote!

Many of our faculty don’t live in AD 21—often due to housing costs in San Mateo County. Why should faculty who live in San Francisco or the East or South Bay support your campaign?
Every state legislator has an impact on the entire state of California, and no single legislator can do it alone. Right now out of 120 total state legislators, only TWO are corporate-free. If we want to see a more progressive California, then it is going to take electing corporate-free progressives up and down the entire state.

California is an example to the entire United States of how a robust community college system can benefit the public by offering pathways to four-year degrees; preparation for stable and meaningful careers; and lifelong learning for all who want it. What do you think the state legislature can do to strengthen the community college system and help it better serve our students and the people of California?
We can provide tuition-free community college so that cost is never a barrier for our students to obtain a higher education. I will fight to invest heavily into the well-being of our staff, by fighting for part-time parity, healthcare benefits, and equitable COVID resources.

Many faculty have been so galvanized to see our students organizing for issues that matter to them. What advice do you have for faculty encouraging their students to get involved in organizing and civic life? And what would you tell young people, including community college students, who are thinking about running for local office?
You only need to be 18 to run for local office, and many of our local elections go uncontested. Far too often, the voices of our young people are sorely underrepresented in our political systems. The best way to gain experience in campaigning and get involved in organizing is by volunteering and joining local political campaigns. I am always excited to speak with anyone who is thinking about running for local office.

You can read more about James’s campaign at https://james4california.com/
Also check out these recent articles about James: