Social justice organizing in our communities

Daly City for Black Lives (DC4BL) is an intergenerational and racially diverse group of Daly City residents who are reimagining public safety by creating solutions that address problems at the root. We are building power necessary for progressive change through collaboration with our community.

Last week, the fear of Daly City’s Measure Q funds being allocated without community input became a reality.  In January, the City Council said that Measure Q budget discussions wouldn’t take place until April, but on March 8 the Council was slated to allocate half of Measure Q funds without public input. Despite public comments asking the Council to move the vote until after a Measure Q Budget Town Hall scheduled for March 15, the Council unanimously voted to spend nearly half of the $6 million Measure Q funds to go towards the Fire Department to restore Fire Station 95.

Later that week, DC4BL held their first virtual forum to hear community input about Measure Q and to reimagine public safety together. Attendees present included local high school and college students, teachers, staff, and neighbors. Also present were neighboring grassroots organizations such as: Pacifica Social Justice, Youth Leadership Institute (YLI), and Faith in Action. The DC4BL community forum created a space for community to connect. In breakout rooms we asked, “In the spirit of reimagining public safety and if money wasn’t an issue, what else would you add as funding priorities?” Some recurring responses included: fully opening the library for the week, events creating opportunities for people to bond, accessible assistance for resources, and investing in a culturally responsive mental health crisis response that also addresses cultural and generational trauma. The people of Daly City showed that they’ve been thinking critically about these topics for some time. These discussions weren’t new. What was different this time around was navigating through them together.

Although passed in November with 72% of the vote, it was clear that there were a lot of unknowns with Measure Q from residents who attended. A longtime Daly City resident shared,  ”Understanding now that the measure cannot specifically state what to fund, it is disheartening to see that half of that funding went into one specific thing…I also agree that the community and local interaction hasn’t been popular, and when we see these issues of disproportionate funding, how can we as a community express our collective voice. ” 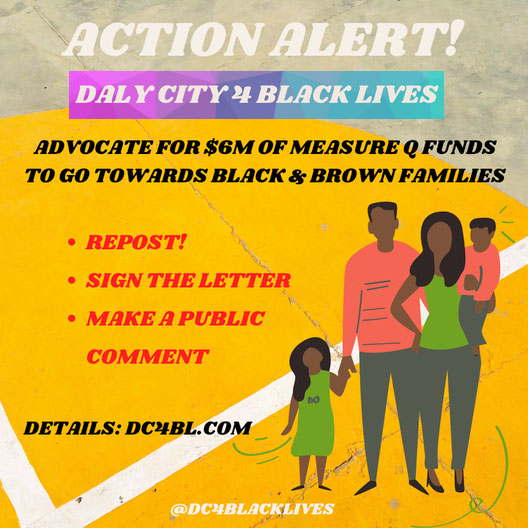 A few days after the DC4BL community forum, the City held a Measure Q Budget Town Hall, which DC4BL advocated for to ensure transparency and community engagement during the budget process. An overwhelming majority of residents who commented expressed concerns about the Council allocating $2,866,703 to restore Fire Station 95 prior to the Town Hall. To be clear, DC4BL is in support of the Fire Department. We can both support the Fire Department and also demand for a culture of transparency and community engagement from the city of Daly City. DC4BL continues to advocate for tangible change that benefits working class Black, Indigenous, and People of Color (BIPOC) communities. We’ve sent a community demand letter to the City Council about our budget priorities, and we are advocating for a better mental health response that does not involve the police. DC4BL is committed to building community power and amplifying the voices of Daly City residents who have been ready to act to improve their community’s living conditions. We encourage AFT 1493 and San Mateo Community College faculty members to join us in solidarity, and we look forward to working with your union and your college community.