working for social justice in our communities

Coalition Z San Mateo is a left-leaning youth advocacy group that works towards community awareness and education on social issues. Formed by San Mateo youth in 2020, the chapter has worked alongside groups such as the Black Lives Matter movement, ACLU North Peninsula, and local elected officials to incite change and awareness of the injustices happening in our community and increase voter turnout.

On June 3, we held a peaceful protest in honor of George Floyd and in solidarity with the Black Lives Matter movement. Our social media presence allowed us to reach the larger San Mateo community and gather as a city in protest.  The protest surpassed our expected attendance, with over 2,000 people coming out to show their support. Planned by Coalition Z’s core team, the protest uplifted the voices of community leaders and was successful at bringing San Mateo together in support of justice and equality. 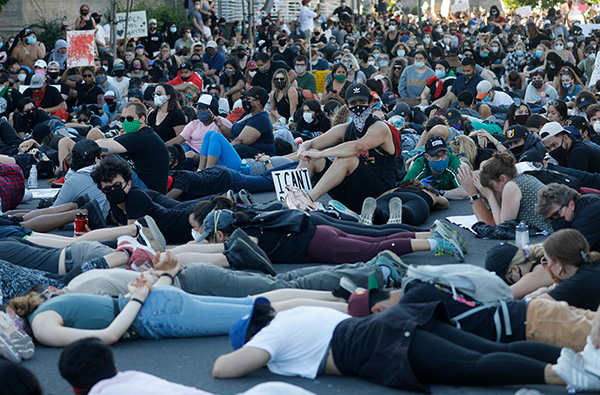 Expanding on our desire to educate and amplify voices in the wake of the Black Lives Matter movement, we hosted a Racial Injustice Conference on August 1. We wanted to provide young people who had followed our work after the protest the resources necessary to apply what they had learned to their lives. Young people and advocacy work are inherently intertwined. The youth of today deal with the consequences of systemic injustice and confront it every day. Our voices must be heard and valued within our democracy and conversations about social issues. We hosted authors, professors, and social activists to speak about their lines of work.

Focusing on redlining in San Mateo

Last summer, the New York Times published an opinion article, titled “The Black Lives Next Door”  by Richard Rothstein (the author of The Color of Law: A Forgotten History of How Our Government Segregated America,) in which he highlighted Coalition Z San Mateo and then focused on how systemic racial covenants created whites-only housing tracts in the Hillsdale neighborhood in San Mateo (and many other neighborhoods around the country) in the mid-20th century  After the article came out, Core made it a priority to educate both members and the public on redlining in San Mateo. Ultimately, this led to having Richard Rothstein speak at our Racial Injustice Conference about his work and its applications to San Mateo.

In this same vein, we opposed Measure Y during election season which limits the city’s ability to create affordable housing by extending a 30-year limit on the height and density of buildings. Measure Y is an example of exclusionary zoning and limits the city’s ability to combat the systemic impacts of redlining. We hosted phone and text banks in opposition to Measure Y all throughout election season, but unfortunately Measure Y passed in San Mateo by a 43 vote margin. This doesn’t mean the work surrounding redlining is over, but we are continuing to look for opportunities to support change towards a less segregated San Mateo as they arise, particularly during election years.

Over election season, we hosted numerous phone banks in support of local candidates and provided opportunities for members to work on the Biden-Harris ticket. Emphasizing the many ways young people can get involved was important to us. Committing to an organization with a vision you care about is a great way to get involved, but it can be as simple as taking time out of your day to call prospective voters. We also hosted phone banks alongside ACLU North Peninsula to support Boun Keola, an incarcerated injured firefighter whose deportation was stopped after massive public support. Calling elected officials exercises our right as constituents to express our opinions and closes the gap between us and the people in office who make decisions for us.

Coalition Z San Mateo is a space for young people to feel heard, express and expand their political beliefs, and create tangible change within their communities. Politics is still a major taboo within the high school system and preparing to engage in conversations about social issues is vital to being a global citizen. (Coalition Z is mostly comprised of high school students, but we do have a handful of community college and college student members.) We want to remind young people that their voices do carry gravity, and matter within larger conversations about politics and activism. Coalition Z will continue to contribute to racial and social justice initiatives and provide young people with opportunities to do so. We encourage all Bay Area youth interested to apply.