The Struggle for City College of San Francisco

a review of Free City! The Fight for San Francisco’s City College and Education for All (PM Press), by Marcy Rein, Mickey Ellinger, Vicky Legion

In the period between the Great Financial Crisis and the Covid pandemic the labor movement actively defended public education. Along with the 2012 Chicago Teachers’ Union strike, the Red State teachers’ strike wave of 2017, and the recent teachers’ strikes in Oakland and Los Angeles, AFT local 2121’s fight to save City College of San Francisco and the 2016 faculty strike will be remembered for their organizing power in an era of privatization and public sector downsizing. 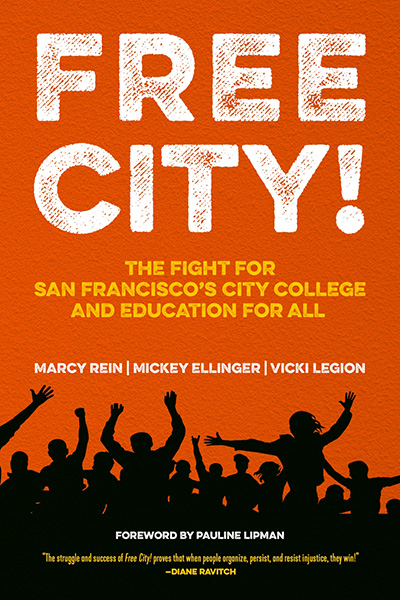 The new book Free City chronicles the successful 5-year accreditation fight to keep CCSF open. It also contextualizes the damage done by those austerity years and the current, ongoing battle to save CCSF from a death by a thousand cuts. Studded with many student and AFT 2121 activist voices of the movement, the book offers astute historical perceptions, connecting the CCSF struggle to the history of the neoliberal education reform movement, while overturning some of the standard interpretations of what happened to CCSF.

Free City opens by reconstructing the situation in which the Barbara Beno-led Accreditation Commission for Community and Junior Colleges (ACCJC) terminated the accreditation of the nearly 100,000-student City College. The year that ACCJC placed CCSF on “show cause” was 2012. In 2008-09, and after emergency Federal Reserve guarantees brought the financial system back from a near-death experience, the same complex of bailed-out finance and real estate interests set their sights on the roll back of state spending on education.

Though state monies were extended in California during the crisis, non-Basic Aid districts like CCSF’s were shorn of guarantees as 2009’s billion-dollar budget black holes loomed. By 2012 AFT-backed Proposition 30 was moving California to higher income taxes, partially plugging holes. San Francisco’s Measure A, backed by CCSF’s AFT local 2121, was set to pass and provide much needed funds to CCSF. In this atmosphere of impending victory for new tax revenues, the accreditor dealt a decisive blow to City College. The idea from the beginning was to teach a lesson to a college that was too democratic, too big, and offering too many low-cost or free services to its city residents. These sorts of “charges” were printed in the Hearst-owned San Francisco Chronicle, whose real estate holdings could stand to benefit from the CCSF carve up.

As Free City recounts, City College Chancellor and former Black Panther Don Griffin steered CCSF through those locust years of 2008-09 by drawing on college reserves and avoiding the worst swingeing cuts to courses or to faculty and staff positions. A crisis of leadership after Griffin’s retirement was followed by ACCJC manipulation of the accreditation process around criticisms of the college’s fiscal policy. Borrowing from Republican attacks on the Post Office and straying into collective bargaining, outside of its purview, ACCJC also demanded the budget-killing full funding of future retiree health benefits.

At first the cruel tutelage of ACCJC and Financial Crisis Management Assistance Team (FCMAT) seemed to have rational remedies. By following ACCJC recommendations on SLOs, faculty, seemingly at war with different initials, could chart a way back to accredited status. But just one year later in 2013, ACCJC announced the complete closure of CCSF in 2014, despite progress on ACCJC complaints and without the normal two-year period for improvements after an initial decision.

The crisis of 2013’s closure announcement led to further enrollment declines and class cancellations. Into the downward spiral of declining state apportionment, administrators tossed payment policy changes, which led to “robodropping” students who hadn’t paid in full by the first day of classes. Free City documents how in one four-semester period more than half of the thousands of robodropped students never re-enrolled.

Faculty and student organizers realized that more political work was required for the cause of CCSF, individuals like Wynd Kaufman or Eric Blanc deepened their involvement. Political advocacy in the era of Occupy and Black Lives Matter led to marches and sit-ins, and it led to City Attorney Dennis Herrera’s 2013 lawsuit against ACCJC, which turned part of the tide in the struggle; meanwhile CFT pushed its own lawsuit and AFT 2121 worked for termination of ACCJC’s authority through Department of Education processes and public hearings, making three trips to DOE’s National Advisory Committee on Institutional Quality and Integrity (NACIQI), an advisory body on accreditation. City and CFT lawsuits forced the secretive, rented-office space ACCJC out into the daylight and took virtually all of its credibility away from it. Favorable rulings saw the college emerging from another invention of the time, “restoration status.” Free City makes clear how none of these City officers, local Democrats, or labor organizations would have moved without the consistent and careful activity of AFT 2121 rank and file.

As Free City notes, “people make struggle, and struggle makes people,” and these difficulties fed the fire of faculty and student-led, community-connected mobilizations. The book apprehends the popular experiences of the union, student, and community organizers, a difference making resistance during the post-crisis decade. Built around the central column of AFT 2121, many lives of the struggle give first-hand accounts—of the student struggle to make rent, of the occupations of campus offices, of police brutality against student manifestations—while the authors provide a historical backdrop of California and US education reform history since Reagan.

The Save CCSF coalition pushed back against this rising tide of austerity. Absorbing social movement energy and cadres from Occupy and the UC student movement, and spawning cadres of Latino students and Black Lives Matter activists, the struggle to save CCSF was sustained by the labor movement’s political practice rooted in an organization of organizers.

In 2016, pressure from years of struggle and student organizers on the solidarity committee convinced the restored elected board to drop the robodropping payment policy. Free City notes that this was the first successful rollback of emergency-era policy. But with an administration full of interim appointees bent on extracting more givebacks from faculty, a strike finally loomed on the horizon.

In April, AFT 2121 organized the first strike in the institution’s history. 2015 wages stood below 2007 wages and with rising costs of living. Mobilizing such a large faculty with so many part-timers for a strike action is no small feat, and the 92% yes vote for the strike showed how years of struggle led to successful consciousness building about the need for a strike. When bargaining finally settled in July, faculty saw 11.4% wage increases in the new three-year agreement.

The final victories for the movement came with the passage of Measure W in 2016, which would fund City College for all, making the institution tuition-free for the first time since the 1980s; and with the January 2017 accreditation of CCSF affirmed for seven years.

For a book that champions its cause, Free City remains critical and refreshing throughout. Though much of Marty Hittelman’s exhaustive research focused on the ACCJC as root cause, Free City demonstrates how the push for dis-accreditation came from Obama’s Department of Education and links the idea of using accreditation to attack community colleges to the .2006 DOE Spellings Commission report, which called for weaponization of the college evaluation process. ACCJC itself complained of DOE pressure. The concerted pushback of AFT 2121 mobilized CFT and sister colleges into a defensive struggle to alter this DOE policy. For now, the bludgeon has been put away.

AFT 2121 left oppositionist Rick Baum has a final telling word in the book. Class cancellations are the core of a privatization and shrinkage strategy. For all colleges this remains a major issue, with stricter guidelines a seemingly system-wide phenomenon in the wake of the lean budget years of 2008. Class cancellations are the once slow, now rapid chipping away of our students and faculty positions. Education code claims this as administration purview and so far, as Baum notes, our labor movement has been unable to challenge this reality. As a system, California Community Colleges have lost hundreds of thousands of students since 2008.
[See: SMCCD Enrollment, Faculty & Revenue Trends Over Last Decade ]

Grounded in a political economy of San Francisco, Free City also shows the relation between campus closures and those of real estate interests never shy of a sale on public assets. The struggle for CCSF unfolded in the teeth of gentrification in tech and real estate dominated Bay Area.

Despite the victories, it is hard not to see a smaller, reduced CCSF today. The tale is told of us too: our SMCCD campuses and system have been successfully downsized since the 2008 since global financial crisis, with big enrollment declines (from 39,300 in 2010 to 30,000 in 2019-20) and reductions in part-timers (738 in 2008 to 544 in 2019). Even if the ACCJC weapon is currently “holstered,” the education reform privatizers may keep faith that their agenda has advanced successfully.

Where ACCJC failed as a private wealth weapon to “disrupt” community college education, the Covid pandemic has proved more powerful, with deep and far-reaching consequences in reforming our colleges around private agendas. With the further shrinkage of CCSF currently unfolding and with the announced closure of Mills College, will Covid’s remote learning boom leave California as an education sector rust belt, with legacy institutions ready for the scrap heap? This imminent threat still seems doubtful, though the CCSF case has shown how pessimistic criticism becomes uncanny prescience. Education “reformers” have successfully downsized many public colleges, but labor remains a key source of the defensive fightback.

Free City concludes by noting how AFT 2121 built strength through the crisis, cementing community and political relationships, and building class consciousness in its members. Historian Mike Davis notes that unions are schools of class struggle, where the politically educated first glimpse wider possibilities. This struggle taught AFT 2121 how to build alliances, to develop original research, and to exercise a political “jujitsu” move to pass measure W to fund a Free City College, making good in some way on the unrealized promise of the Bernie Sanders campaign.

The strength of the movement to save CCSF and of AFT local 2121 is being tested today, when much of that earlier experience of post-crisis opposition can’t be immediately reconstructed in a society staying home to avoid Covid. But the Black Lives Matter protests of 2020 show the persistence of the post-crisis decade’s social movement forms of mass opposition in rallies, marches, and occupations.

CCSF needs the support of a broader struggle, like the public sector fightback movement from a decade ago, which bore fruit in the form of new tax revenues for education. Fred Glass’s From Mission to Microchip notes how California voters followed Occupy’s politicization of inequality to the polls to give labor a victory in proposition 30. Taxes on high earners from those years produced state revenues even in the 2020 pandemic year.

CFT is currently backing the California Tax on Extreme Wealth; this wealth tax would claw back some of what the billionaires have expropriated in the year since the Covid crisis. As the case of CCSF shows, concerted labor and social movement pressure must be built to force the political system into action. The struggle for a better future for public education is far from over, and our labor organizations have a vital role to play.