I’m an adjunct faculty member at SMCCD, where I’ve worked as a librarian for all three schools. This semester, I’ve received 14 emails from AFT. Of those, five spent a significant portion discussing adjunct issues and were primarily concerned with the goal of 85 percent pay parity.

I found them incredibly insulting.

As an adjunct with vanishingly little chance of getting full-time or tenure status, I’m excited for stronger pay parity. But I’d love it more if my Union expressed even a basic understanding of my situation as an adjunct. 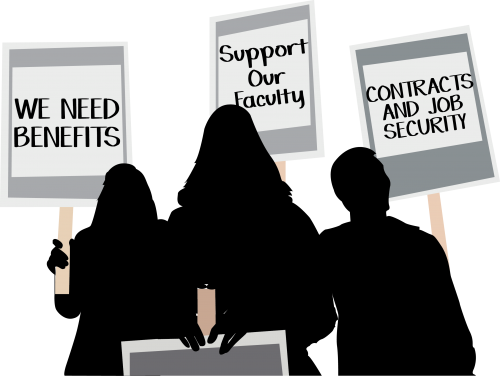 To demonstrate the lack of understanding: one of the 85 percent pay parity emails arrived in my inbox on February 10, two days before we took two days off to celebrate Lincoln’s Birthday and Presidents’ Day. The email discussed pay at length, but didn’t mention that since I’m paid hourly and work Mondays and Fridays, I would lose $769 during these holidays. I would rather have worked.

Spring Break is coming up. I’ll get the week off, to the cost of $1,304. I’m sure I’ll receive emails from AFT telling me to have a great break and come back refreshed. AFT doesn’t seem to understand, or care, but these emails are a slap in the face to someone who’ll come back impoverished.

How about job security?

I wonder about the people sending these emails, and how they must not understand that they’re being shockingly insensitive. Do they know I see their supposedly lofty but extremely self-congratulatory goal of pay parity by 2023 as an insult, since my contract ends in May 2021? I may still be with SMCCD in 2023, but since I sign new contracts three times a year, I certainly can’t count on the pay increase they’re fighting for.

What about affordable health benefits?

To perhaps a bigger point, pay parity isn’t everything. Lots of changes would equal more money than 85 percent pay parity.  Imagine affordable medical benefits. The $1,505 adjuncts are offered in the spring and fall are far less than the Affordable Care Act charges me a year, and it comes too late. Imagine family leave. Imagine accruing vacation days. And yes, imagine paying adjuncts for holidays as though we were actual employees so that we, too, could be excited for them.  Paid holidays would equal more money at the end of the semester than 85 percent pay parity.

And not to state the obvious, but 85 percent? We’re expected to quiver with excitement? Is it gauche to point out that I want my Union to fight for 100 percent? Is the best-case scenario that six contracts from now adjuncts still won’t have full pay parity, while our Union ignores every other issue relevant to us? This is their solidarity? Too little, too late.

Should we feel lucky with partial pay parity by 2023?

There are many issues that matter to adjuncts. Pay parity is surely high on the list. But the way AFT talks about pay parity is dangling a carrot. The reality expressed in these emails is that AFT will work really hard to try to get partial pay parity by 2023, and that they think we should feel lucky they’re doing that, and that in the meantime we should show solidarity, praise them and their efforts, and give them every ounce of our support. They can dangle a carrot, but I’d prefer my Union didn’t view me as a donkey.

Honestly, I get it. I get that adjuncts are so far from full pay parity that it’s not even discussed, and that medical benefits, family leave, pay for holidays, and guarantees of work aren’t on the table. I get that we’re second-class citizens. We all knew that when we signed our first contracts with the District, and I don’t resent it. But I do resent AFT emailing me about (partial) pay parity the same week I lose two days of pay. I resent AFT pretending they’re working for me when they’re sure to send me a “Happy Spring Break” message that will cost me a quarter of my paycheck. I resent being told to organize and support and fight for a Union that holds me in such low regard, and that doesn’t hear my concerns over the sound of the thunderous applause they give themselves while they’re fighting to keep me underemployed.

I’d love 85 percent pay parity. I’d love 100 percent pay parity more. I’d really love to be excited for Spring Break. But I’d also just love it if my Union respected adjuncts enough to have a little sensitivity when they talk to us. I can’t express how much even that tiny show of solidarity would matter.