City College of San Francisco in the Crosshairs Again

Flashback. It is 2010. The Great Financial Crisis unleashes an epic wave of austerity in California, setting the Golden State adrift. Rather than use Democratic supermajorities to pass tax on the wealthy and corporations and fund education in California, Governor Brown commits to austerity and to putting all tax increases before a popular vote, which is not required by law. School and community college districts across the state respond with teacher and staff layoffs, as classes and opportunities disappear.

One particular college, City College San Francisco (CCSF), bucks this trend by maintaining the legal minimum of budget reserves to avoid catastrophic cuts to classes, faculty, and staff, cuts that will alienate the public from these traditionally popular institutions. Coupled with arts and music-killing repeatability restrictions (still in place today) and Gates Foundation-sponsored attempts to restrict course offerings, the community aspect of California’s extraordinary system seems to be bleeding out. 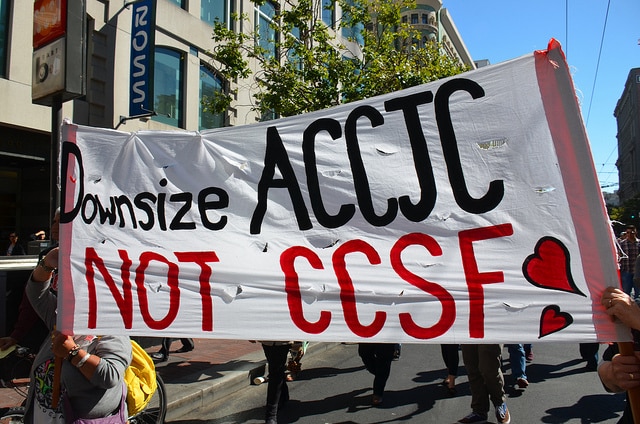 CCSF then comes under sustained attack from the rogue accreditor ACCJC in 2012, just as the campaign for Proposition 30, an AFT and NEA-backed ballot initiative to tax high-income earners, is heating up. For years, the notorious ACCJC chief Barbara Beno leads an effort to shutter the largest community college in our system on wholly specious grounds. The elected board of CCSF is deprived of its governing powers because of the accreditation hardball. Enrollment plummets, destroying revenues and enforcing austerity.

CCSF survives this tribulation because of the courage of its faculty union, AFT local 2121, which is among the most militant in our system and in the San Francisco public sector. (I can still recall the party at the CFT convention the year that CCSF faced down and beat ACCJC.) In the meantime, taxes on high-income earners passed under Proposition 30 are extended under another successful union-backed proposition, 55—both successes coming at heavy cost to union war chests. AFT 2121, working from a strategy of social justice unionism and community engagement, moves from one victory to another, this time wining popular support to pass a local ballot initiative in San Francisco, 2016’s Proposition W, to tax high-end property sales and fund tuition-free CCSF for all San Francisco residents.

Fast forward to the end of the decade and the success of AFT-backed state tax initiatives and the property transfer tax in raising revenues is clearly visible in 2019 bumper-crop budget projections. Even as other states face huge shortfalls in revenues because of the pandemic-induced economic depression, California’s revenues are comparatively healthy because of our taxes on high-income earners, who are doing very well in the context of remote work and the Covid-induced Federal Reserve backstopping of Wall Street in toto, from junk bonds to hedge funds, far exceeding in scope the 2008 bailouts and subsequent half-decade of quantitative easing.

Yet in 2019-2020, and before the pandemic, the misleaders in the CCSF administration and on the board of trustees were planning extensive cuts to course offerings and part-time faculty positions. A college that once boasted nearly 100,000 students has been reduced to just under 30,000. This year, even more cuts are proposed, with CCSF full-timers now warned they will receive pink slips this spring. With the pandemic as a new reason for austerity, Democrats in Sacramento have been sharpening their blades to slash spending on our sprawling system of community colleges, once again refusing to raise taxes before or after the bitter defeat of Proposition 15 last fall.  Colleges like CCSF, which are funded by the state and not by local property taxes (like our basic aid district) are due to face sharp cuts, even though the State budget shortfall of historic proportions has not materialized. Administration and board misleaders, who have also bungled bond funding for a performing arts center, are looking to even more extensive cuts than the ones they planned a year ago. The existence of CCSF is again under threat. Administration and board are making sure the crisis doesn’t go to waste.

ACCJC was the preferred get-tough instrument for the various forces opposed to public higher education and the deeply unionized campuses like those in California, where labor has fought for and won more higher taxes even if Democrats then often curtail or redirect the spending that should ensue: the boondoggle online-only college Governor Brown created would be one salient example of how Sacramento misuses funds labor fought for.

Education unions that actively engage their communities like Local 2121 are politically potent organizations, even alternative social movements (in embryo) challenging the Democratic machine. But with the ACCJC strategy to shrink and reduce the California system gone for the moment, it now appears that a less top-down, more local series of actions are afoot. A difficult fight lies ahead. Our union must stand in solidarity with local 2121 and the diverse students of CCSF. This is a political battle for the future of higher education that will have consequences beyond San Francisco. Major increases in spending will be a prerequisite to reopen campuses and Governor Newsom and the legislature have already turned back one attempt to raise a wealth tax and fund such measures.

As community college faculty and AFT members, we must pledge our strong support to our faculty colleagues and the student body of CCSF. Their struggle is our struggle. The pandemic has so far been a hot house of historical transformations, with education losing ground as speculative wealth grows to dizzying new levels. It is a time, as historian Robert Brenner notes, in which capitalist elites are escalating the plunder of our society and education systems. Our fight back movement in the public sector must begin now.

FACULTY SPEAK TO BOARD IN SUPPORT OF EQUITY FOR ADJUNCT FACULTY

Jessica Silver-Sharp, Timothy Rottenberg, Michael Phipps and Lucia Lachmayr made comments to the Board of Trustees at the February 24 Board meeting calling on the Board to support a 4-year path to part-time parity (at 85% pro rata) and a mirrored salary schedule for part-time faculty members. 180 letters in support of part-time parity were […]