CAMPAIGN FOR A FAIR CONTRACT

On Wednesday, February 5, close to 100 faculty members found time to join Union Solidarity Hours at all three campuses. Below are reports from various attendees of the events at each college.

AFT1493 members Showed UP at the Skyline Solidarity Hour! Faculty members came from a wide spectrum of different departments and divisions — they came before and after committee meetings and between classes. It was an incredible event filled with conversations, ideas, and brainstorming as well as hearing what concerns faculty have as we begin ramping up our actions to support a fair contract. We had over 40 participants, about the same number of signatures to the New Year’s Resolution card for Chancellor Claire. Three students were also there from The Skyline View, taking photos and asking good questions.
We started with a brief update on negotiations, and how they are still stalled. Then, we discussed the red Pledge Cards and what continued actions faculty appeared to support thus far. We discussed the importance of attending the Board of Trustees meeting on Wednesday, February 26, as well as inviting the CSEA and our students to the event to show increased support and greater numbers. We had a good conversation on “work-to-rule” and listened to members voice concerns of retaliation over such an action as well as noting the fact that refusing to do committee work or SLOs, for example, may not be as “visible” as other types of actions. Many expressed more support for the idea of carrying out a combination walk-out, strike and teach-in.
The Solidarity Hour closed with a brief reminder about the Board of Trustees meeting (2/26), the value of the red pledge cards, getting more signatures on the New Year’s Resolution card for Chancellor Claire and inviting students to the BOT on 2/26.  We passed out the new student information sheet that can help students understand the relationship between faculty working conditions and student learning. A great exchange of ideas, camaraderie and delicious homemade treats — in an inspiring hour of solidarity!
-Annie Corbett, Psychology 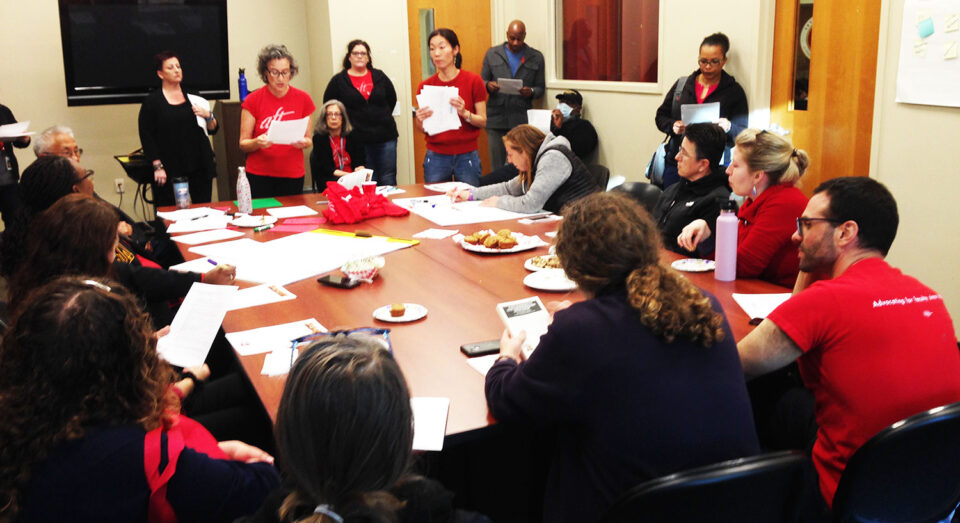 At Cañada about 25 faculty and several students met in The Grove to sign the card for Chancellor Claire and strategize about next steps. Faculty expressed frustration with the lack of progress and supported the need to escalate, and they offered their support in talking to other faculty, meeting with elected officials, coming out to the Board of Trustees meeting on Wednesday, February 26, and building a more public campaign.
Notably, the negotiation issue raised most often at the Solidarity Hour centered around workload. Several faculty commented on the impact that the increased workload has had on their families and children. Many identified with the graphic on the card and felt that it captured their frustration and unhappiness with the balance between their commitment to teaching and commitment to their loved ones. We got 23 signatures on the card for Mike Claire.
-Doniella Maher, Cañada Chapter Co-Chair

We had good discussions with faculty about bargaining too and the need to escalate and work on collective actions.  We also had several students stop by and talk with us, one whom invited us to give a pitch to his student club!  He said he would try to make it to the BOT action. Many committed coming to the Board of Trustees meeting on Wednesday, February 26, several new faculty signed pledge cards and about a half dozen additional faculty agreed to speak with 5-10 colleagues…building up the CAT team/periphery!
-Paul Bissember, AFT 1493 Executive Secretary

We discussed what work to rule may look like, but our group thought it would be more worthwhile to have a rally and then strike. A rally is planned for ASCC Club Day on Wednesday, February 26th (sometime between 11:30 am and 1 pm). Details for the rally, such as speakers, goodies and handouts, were begun to be set up
-Lezlee Ware, Political Science

We gave an update on negotiations, had a discussion around ideas for next steps, ways to implement work-to-rule and getting people out for the Board of Trustees meeting on Wednesday, February 26. A number of faculty from departments that didn’t have CAT representatives agreed to help us with outreach in their areas. People were definitely interested in taking action to try to move negotiations along, but there was no prevailing consensus as to what that might look like.
-Steven Lehigh, CSM Chapter Chair

The CSM discussion was mostly focused on what we would need to do in order to get organized enough to win the fight ahead and in that light people agreed to go back to their own departments and have local level discussions about how work-to-rule or other actions would work for them. There was also some good discussion on the tools members would need to have these discussion successfully, i.e. some talking points, particularly on the mechanics of embarking on campaigns of work-to-rule or other actions, and feedback forms to relay the information collected back to CAT. About 25 faculty attended and talked about negotiations and escalating faculty responses.
-Lachlan Batchelor, CFT Project Organizer

Folks thought that a principled “opt out” on division meetings might work. One idea was for everyone to email their deans when the division meeting agenda is sent out and say something like “I’m sorry; I can’t make this meeting. I have too much grading and class prep to take care of.” And then everyone goes to some central place to have a grade-in. We make placards or something to make it clear that this is workload resistance.
-Teeka James, AFT 1493 Co-Treasurer

During the time I was there folks were signing the big card for Mike Claire, and then a group of eight or ten of us had a nice chat about the work-to-rule idea, which seemed confusing, and we also discussed some other possible strategies.
-Malathi Iyengar, Ethnic Studies