An interview with a Madison teacher

My sister and brother-in-law are secondary school teachers in the Madison Metropolitan School District. Jenny teaches art at an elementary school, and Bill teaches history at a high school. They also have two children: Tegan Anne, a kindergartner at a K-2 school and Henry, a fifth grader at a K-5 school. When I finally caught up with Jenny, she was parked in her driveway with her six-year-old daughter asleep in the back seat. They had been downtown for over six hours exercising their right to peaceably assemble and petition the government. The peaceably assembling part went well; petitioning the government, not so much. While Tegan slept, Jenny told me about her experience on the front lines of the Wisconsin public workers’ struggle to retain collective bargaining rights.

Jenny: It’s been nuts around here. I’ve been dragging the kids down to the capitol everyday this week. It’s been really cold, too, so there’s been lots of whining about cold feet. 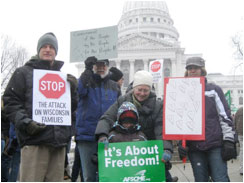 Teeka: What do the kids think about what’s going on?

Jenny: Tegan loves it—she loves the drumming and the chanting! The first Wednesday—the first day I called in sick—Tegan and I went down to the capitol, and her teachers were there, too, so she was really excited to be there with them. Henry’s trying to figure it all out, so we’re talking about it at home pretty much nonstop. The district ordered us to not talk about it at all with the kids, so I’m not, but lots of kids have been going down to the capitol with their parents, and they’ve seen me and their other teachers down there, so the kids will say stuff to us, ask questions. It’s a balancing act to figure out how to deal with it. One kid in my classroom made a sign to take to the rally that afternoon.

Teeka: What’s the climate at your school? Are most teachers calling in sick?

Jenny: Well, yes and no. The teachers are not divided, which is good, but it’s really hard to keep up with it all; everything’s changing so quickly. When it all started and MTI (Madison Teachers Incorporated—the local union) called for the sick out, a lot of people didn’t know what to do. Bill and I went to work because we weren’t sure what it all meant—you know, what would happen if we called in sick, what to do with the kids. We wanted clarity. At my school, the staff met after school and decided to act together, but agreed that everyone would do what felt right for them and no one would pressure anyone else to demonstrate or not. Lots of us called in sick the next two days of that first week.

Teeka: So what happened at school? Did the district dock pay?

Jenny: Well, yes they say they are going to. Anyone who called in sick on those days has to show a doctor’s note; otherwise, they’ll lose a day’s pay.

Teeka: Do you normally have to show a doctor’s note when you call in sick?

Jenny: No! But there’s another problem (one of many!): the kids have missed several school days, which the district is going to have to figure out how to make up. They had only planned for one snow day, so I don’t know what they’re going to do. The thing is, to add days, the teachers will have to teach the kids—and so far the word is that the district will not pay the teachers for those days. Plus, we got docked for the sick days . . . people are really mad.

Teeka: Did Bill’s pay get d 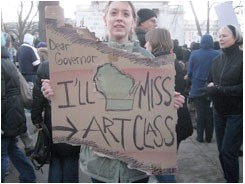 Jenny: Yes. Everyone’s did. Once people started calling in, the principals were ordered to check staff in twice a day. But it really depends on your principal what’s actually happening. My principal has us check in twice a day, but Bill’s is only making staff check in first thing in the morning. So Bill’s been checking in and then going down to the capitol at lunch time.

Teeka: So is anyone calling in sick anymore?

Jenny: I think some are, but most of us are teaching during the day and then dashing down to the capitol after school. MTI is trying to divvy up the district so we can keep a teachers’ presence down at the capitol but not have everyone getting burned out and impacting the kids too much. So each day different schools are designated to go to the rallies. MTI is sending out emails and all that electronic stuff telling us where to congregate, meeting points and times, that sort of thing. There’s a constant list of speakers.

Teeka: So what’s it like down at the capitol?

Jenny: Considering how fast everything’s had to happen, it’s pretty organized! At first the idea was to occupy the capitol to try to stop the votes from taking place. Some people did get in initially and stayed there for a few days—people were bringing sleeping bags, food, all sorts of stuff to help them. Early on at Bill’s school, when Jesse Jackson spoke at the rally, that morning he walked the teachers into work at East High School and then at lunch time, 800 students walked out and marched with Jesse Jackson from the school straight up East Washington all the way to the capitol—about two miles!—and occupied the rotunda. Bill walked with them during lunch and then went back to work. That was the beginning. The next day the sick out started. Bill’s school is mostly low income and African American; it was great to see the kids be such strong leaders in all of this. 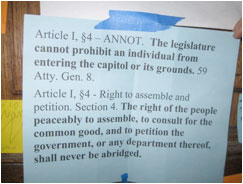 e at the capitol now? Is it still occupied?

Jenny: Well, I’m not sure. I think some people might still be in there, but the governor closed the capitol building to the public, so we were all stuck outside. One issue is that folks are saying it’s illegal to close the capitol to the public. Walker called in all sorts of law enforcement, but of course many of them—especially the Madison cops, are with the teachers and the rest of the workers, so they refused to arrest people who were occupying the building. At one point, the Democrats from the Assembly brought their office desks outside onto the capitol lawn, saying that if Walker was going to close the building to the people that they would bring the government out of the building back to the people. It was pretty cool!

Teeka: What do you think will happen, Jenny.

Jenny: Well, the rumor at the capitol is that Madison will go on general strike. And if the city workers strike, MTI will be right behind them. If that happens, Bill and I will definitely walk. I think most of our staff will, too. But, what’s really going to happen is lots of people are going to lose their houses and their jobs.

Teeka: Have you already had furloughs and whatnot so far?

Jenny: No, we haven’t. And get this: the teachers voted and MTI had agreed that we’d put in more for health care and pensions in exchange for keeping collective bargaining rights. But Walker turned it down. Walker wants to up class size, get rid of art, music, PE, technology—all the stuff Madison’s been able to keep somehow. This is so totally not about money. He just wants to kill the unions.

Jenny: I don’t have the details here, but I think Bill and I would each have to pay $500 per month total. That means we’d take home $1,000 less each month. I’m not sure how it all would work out with taxes and all, but that’s about a quarter of our total take-home pay. 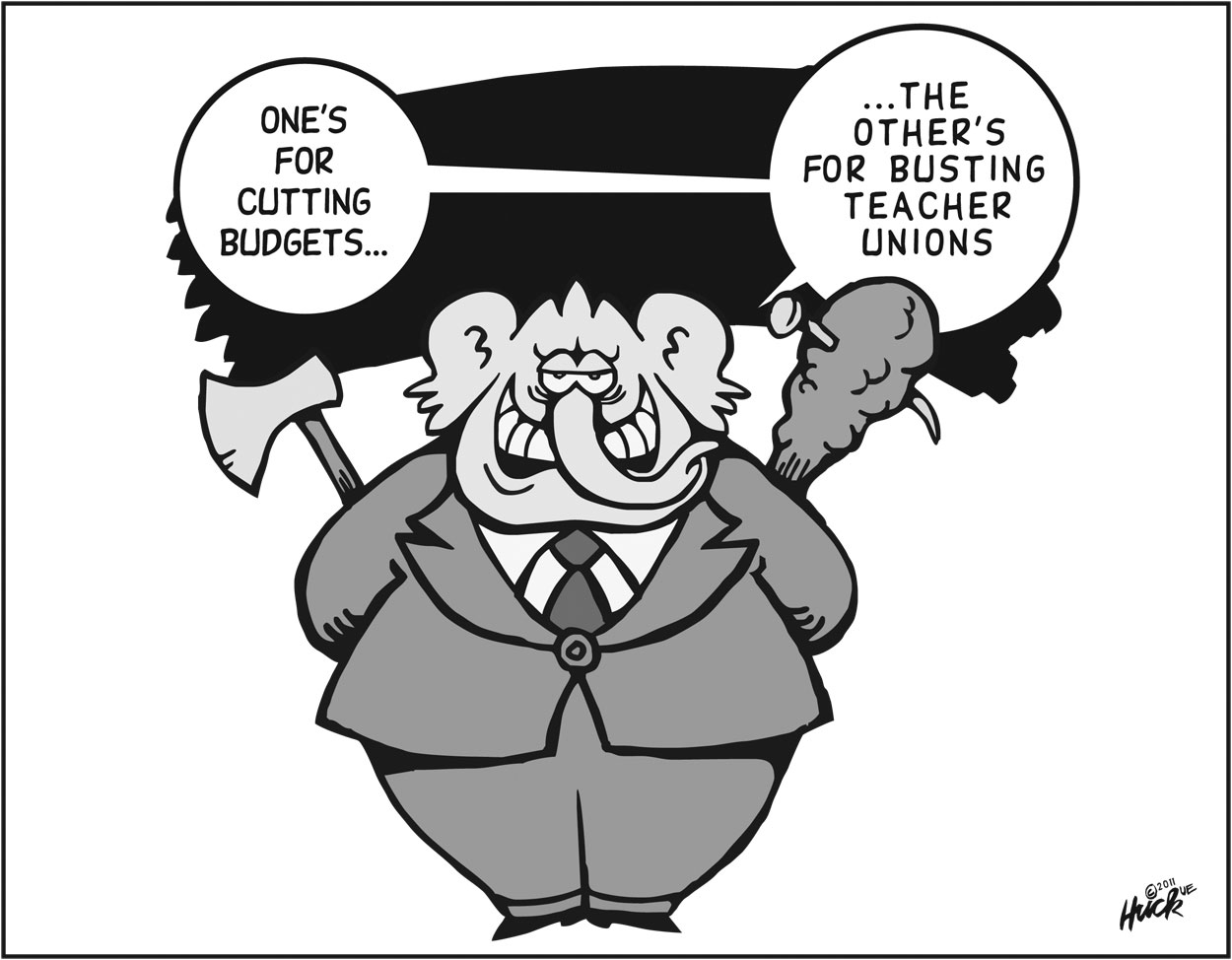 Teeka: Holy cow! That is a huge cut!

Jenny: I know. It’s just incredible! The MTI crisis committee is meeting tonight. A lot will depend on how the vote goes in the Assembly. What is so crazy to me is that it seems like the government has forgotten about the kids. Who is it that Walker thinks is going to want to be a teacher in Wisconsin after all of this? It’s just heart breaking. Tegan asked the other day why the governor didn’t like music. Henry answered her and said it was because his heart was all shrunk up like the Grinch’s!

Teeka: Well, there you have it. Spoken from the mouths of babes!

Jenny: I know. They see what the adults’ priorities are. They get it.

Below are your AFT 1493 union reps for Fall 2022. If you have questions about our union, your rights as a faculty member or any issues related to working conditions, start by contacting your campus chapter chair or reach out to AFT 1493 Executive Secretary Marianne Kaletzky. See AFT 1493 Executive Committee members page.

CLASS CANCELLATION POLICIES – FALL 2022 AND BEYOND

On July 27 Chancellor Claire wrote to faculty to share the news that he has directed administrators to allow Fall 2022 sections with enrollment of at least ten students to run—rather than implementing the usual Board Policy that allows deans to cancel classes of less than 20. AFT applauds this decision, which we strongly believe […]